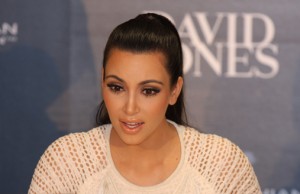 American reality television celebrity Kim Kardashian was once again the cause of a mass of humanity (and massive traffic jams in the Sydney CBD), described by many as complete “chaos”.

Coincidence or not, emergency vehicle sirens could be heard roaring through Sydney’s CBD district, with car accidents and fan barricades at bursting point, all while mother nature delivered a torrential downpour of rain.

Inside David Jones sirens of a different kind – media and fan heat seekers Kim Kardashian and sister Khloe promoted their wares – new handbags dubbed the Kardashian Kollection. The bags kept cash tills ringing, although a purchase of a handbag did not 100% guarantee an autograph or photo.

The massive queue to see the celebs went from inside the department store on Castlereagh Street and around many city blocks, with teeny poppers forming the most part of of the crowd.

“I love the Kardashians” said Tori Rudolph, 13, who skipped school. The influenced teen had been been waiting in the city since 10pm on Wednesday night – well past bed time. Five other school friends had joined her.

Police officers in yellow vests and numerous security guards patrolled the outside of the popular store as the dynamic duo promoted their wares to a captive audience.

Kardashian – continuing to put the business in show business, be it Hollywood or Australia.

Keeping Up With The Kardashian’s
au.eonline.com/on/shows/kardashians/index.html