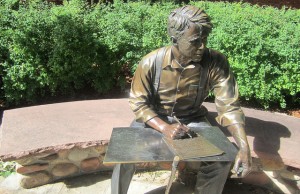 The Ekstrand Sculpture Plaza, located at the south entrance to Old Main in the heart of the University of Colorado at Boulder’s Norlin Quadrangle, was dedicated September 5, 1997 in memory of Bruce R. Ekstrand, former vice chancellor for academic affairs and member of the CU-Boulder faculty for 30 years. Ekstrand was a member of the faculty at UC Boulder from 1966 until his death in April 1996, at the age of 55, of respiratory failure caused by a cerebral aneurysm. The seated bronze sculpture, designed by George Lundeen, mounted on a curved sandstone bench, depict’s Ekstrand’s favorite poet, Robert Frost, in the midst of writing a poem.