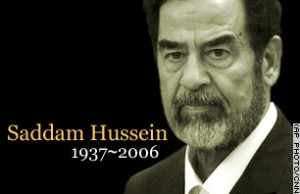 Hussein Hanged With ‘Fear In His Face’

Saddam Hussein was hanged Saturday for crimes committed in a brutal crackdown during his reign, U.S. and Iraqi sources tell CNN. Iraq’s national security adviser said: “He was a broken man… You could see fear in his face.” President Bush called the execution “an important milestone” for Iraq.

Picture and caption taken from www.cnn.com