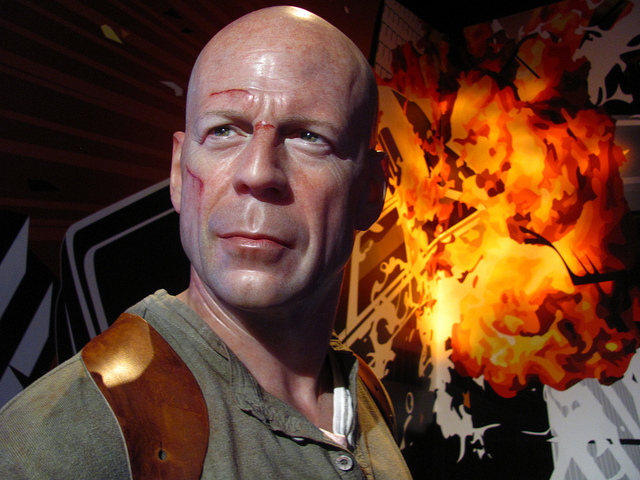 Walter Bruce Willis was born on March 19, 1955, in Idar-Oberstein, West Germany. Willis was raised in, Penns Grove, New Jersey, as the eldest of four children born to Marlene and David Willis. In 1972, Willis’ parents separated while he was in his teens; he attended Penns Grove High School in his hometown, where he was teased and called horrible names like “Buck-Buck” by his schoolmates, because of a stutter. However, Willis realised that while on stage, it was easier for him to express himself, and he lost his stutter in the process. He took to performing on stage, working with the drama club and was the student council president while in high school. After leaving high school, Willis did a few odd jobs before returning to acting. He enrolled in the drama program at Montclair State University, where he was cast in the class production of “Cat on a Hot Tin Roof.” in his junior year, Willis left school and moved to New York City. After multiple auditions, Willis made his theatre debut in the off Broadway production of “Heaven and Earth.” He gained more experience and exposure in “Fool for Love,” and in a Levi’s commercial.

Willis auditioned countless times and contributed to minor, usually uncredited, film appearances before being cast for the role of private eye David Addison in the hit romantic comedy TV series “Moonlighting” (1985). The series launched Willis’ reputation as a hot, new talent and went on to land the role of John McClane in the hugely successful film “Die Hard” (1988). Willis reprised the same role in the eagerly anticipated “Die Hard 2” and the excellent box office returns demanded a further sequel “Die Hard: With a Vengeance” (1995), which also starred Samuel L. Jackson.
Amid the action movie buzz of success, Willis took the part of providing the voice of “Mikey,” the baby in the widely popular family comedies “Look Who’s Talking” (1989) and its sequel “Look Who’s Talking Too” (1990). Over the following decade, Willis starred in a variety of very successful films, some offbeat ones and others that were box office failures. During the 1990s, Willis also appeared in several independent and low budget productions that won him new fans and praise from the critics for his intriguing performances working with diverse film directors.
After a bout of unsuccessful movie appearances from 2000 to 2003, Willis made a comeback in the critically applauded Frank Miller graphic novel turned movie, “Sin City” (2005). He voiced the character “RJ” the scheming racoon in the animated hit, “Over the Hedge” (2006) and “Die Hard” fans were very happy to see the return of John McClane to the big screen in the high tech “Live Free or Die Hard” (2007).

Bruce Willis was married to Demi Moore for approximately 3 years before their divorce in October 2000. They currently share custody of 3 children. Bruce has been married to Emma Hemming since March 21, 2009.