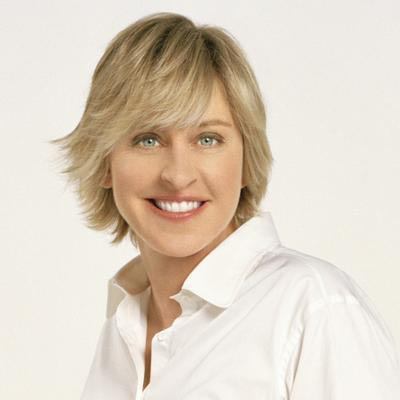 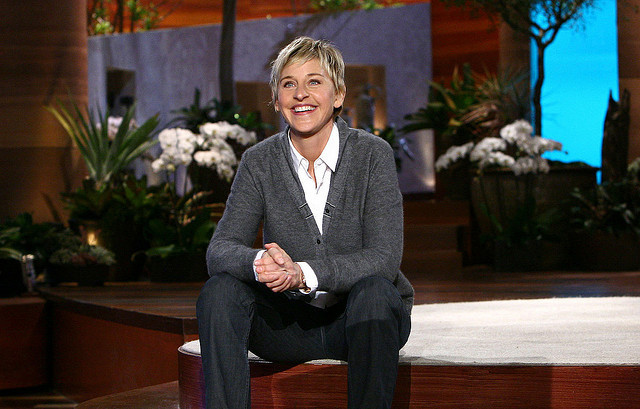 Ellen Lee DeGeneres is an American stand-up comedienne and television hostess of the Emmy winning talk show The Ellen DeGeneres Show. She is also set to be one of the judges on American Idol for its ninth season which premieres in 2010.
Ellen is an entertainment pioneer that has made many milestones in the industry; she won five People’s Choice Awards for Favorite Daytime Talk Show Host and Favorite Funny Female Star for four consecutive years. Ellen also won the Johnny Carson Producers of the Year Award in Variety Television from the Producers Guild in 2005 and 2006 and recently won her first Teen Choice Award for a new Twitter category.

Ellen also as some success as an actress, appearing in the 1996 romantic comedy Mr. Wrong and Peter Chan’s film The Love Letter.

Ellen Lee DeGeneres was born January 26, 1958 in New Orleans, Louisiana. Her parents Betty Jane and Elliott DeGeneres divorced when Ellen was in her teens in 1974. Her brother Vance stayed with their father while Ellen lived with her mother and stepfather Roy Gruessendorf.

She attended Grace King High School for her first years before transferring to Atlanta High School, from which she graduated in May 1976. Ellen attended the University of New Orleans, majoring in communication studies but left shortly after to work as a legal secretary. Other jobs included sales clerk at the chain store the Merry-Go-Round and waitressing at TGI Friday’s.

Ellen’s first public speaking experience came at a public speaking event that caused Ellen to turn to humor to offset her nervousness. Her quick thinking paid off with Ellen receiving follow-up offers to do stand-up comedy. She performed at small clubs and coffeehouses then advanced to become the emcee for Clyde’s Comedy Club in 1981.

Ellen’s quick rise came with national tours and being named the funniest person in America after winning a Showtime competition. She got her big debut in 1986 when she was invited onto The Tonight Show and earned the distinction of being the only female comic to be invited by Johnny Carson to sit on the famed “couch” during her first visit. Ellen made regular appearances on other talk shows such as The Late Show with David Letterman, The Tonight Show with Jay Leno and The Oprah Winfrey Show.

Ellen and The Ellen Show

In 1994 Ellen’s popularity opened up the opportunity to headline her own sitcom Ellen which aired on ABC. In 1997 Ellen’s title character revealed that she was a lesbian, the first time in history; this came after Ellen herself made the revelation to the real world. After much controversy the shows rating began to decline and after 109 episodes, Ellen was forced to return to stand-up comedy. In 2001, Ellen tried to make a comeback with a new series, The Ellen Show on CBS, but it too got cancelled due to low ratings.

The Ellen DeGeneres Show was launched in September 2003 and received critical acclaim. In its freshman year, the show which showcases Ellen’s dancing and singing skills won four Daytime Emmys, including Outstanding Talk Show. During its six seasons, the Ellen DeGeneres Show has earned a total of 29 Daytime Emmy Awards and On May 1, 2009, it celebrated the 1000th episode, featuring celebrity guests such as Oprah, Justin Timberlake, Paris Hilton, among others.
Ellen was included in Forbes’ top five “Most Influential Women in Media”, was voted “Best Daytime Talk Show Host” by Parade.com readers, and voted “Favorite TV Personality” by The Harris Poll’s annual Favorite Television Star list, topping contenders Oprah Winfrey and Jay Leno. She also received Television Week’s Syndication Personality of the Year.