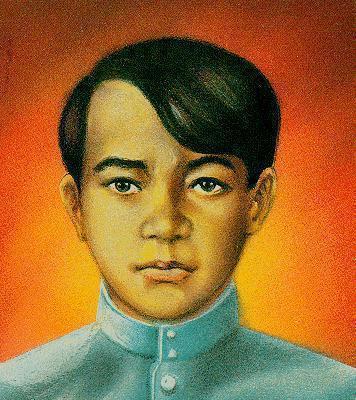 Emilio Jacinto aka the “Brains of the Katipunan” is referred to as the hero of the Philippine Revolution. Emilio joined the Katipunan secret society at twenty years of age. The Katipunan was a

Philippine revolutionary society founded by anti-Spanish Filipinos in Manila in 1892, which aimed primarily to gain independence from Spain through revolution. Emilio went against his family when he joined the secret society in the hopes of contributing to end the injustice suffered by Filipinos at the hands of the Spanish.

Emilio was born December 15, 1875 in Trozo,Tondo, Manila, to father Mariano Jacinto and mother Josefa Dizon. Emilio grew up without his father since he died when Emilio was just an infant. Emilio was raised by his mother and his uncle Don José Dizon.
Emilio’s linguistics included Spanish and Tagalog and though he preferred to speak Spanish he was a prolific writer in Tagalog. Emilio attended San Juan de Letran College, and continued his law studies at the University of Santo Tomas before dropping out at the age of eighteen to join the Katipunan.

In 1893 Emilio and his cousin were initiated into the Katipunan in the home of Don Restituto Javier. When Emilio became a member of the Katipunan he served as fiscal adviser and secretary to its founder and leader Andrés Bonifacio (Supremo of the Katipunan). He was known in the Katipunan as Pingkian and was referred to as the “Brains of the Katipunan” because of the many documents that he had prepared which included the constitution.

Emilio wrote for the newspaper called Kalayaan under the pen-name Dimasilaw; he wrote poetry, manifestos, statutes and most of the articles and editorials of the newspaper. He authored the first edition of the Kartilya ng Katipunan, a guidebook to the Katipunan’s rules and principles which was publicized in 1896. Included in its teachings were: “A life that is not dedicated to a noble cause is like a tree without a shade or a poisonous weed”, “Defend the oppressed and fight the oppressor”, and “True piety consists of being charitable, loving one’s fellow men, and being judicious in behavior, speech and deed”.
Emilio was also noted as a close friend to Bonifacio, he supported him and his Katipunan comrades to the best of his ability. He also headed the Katipunan delegation to a Japanese admiral to whom they handed a memorial to the Emperor of Japan seeking, in lyrical language, his support. He was the sole adviser of the Katipunan’s Supreme Council, later the general in charge of the army of the North, a knowledgeable supplier of firearms, ammunition, even bows and arrows, and musical compositions.
With the outbreak of the Philippine Revolution in 1896, Emilio became the commander-in-chief of the revolutionary forces in Laguna and after Bonifacio’s death; Jacinto continued fighting the Spaniards but refused to join the forces of General Emilio Aguinaldo.

In April 1899 during a battle in Mahayhay, Laguna, Emilio was wounded in the thigh, captured by Spanish troops. He died in prison, of his wounds. Bonifacio always called him “the soul of the Katipunan”. Generations of Filipino university students have made Emilio Jacinto their inspiration and patron saint.