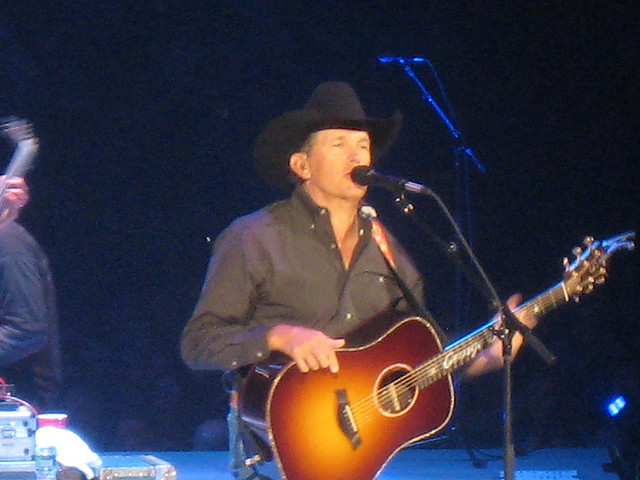 George Strait is an American country music superstar that has been in the business for over four decades. He holds the Country Music Association’s all time record for most career nominations with a total of 73. He was the CMA Vocalist of the Year five times being the only artist in
history to be so honored in two different decades.

Strait is also a 2006 CMA Hall of Fame Inductee and was awarded the National Medal of Arts by President Bush in 2003.

Celebrated as the “King of Country”, Strait is notorious for his distinctive approach to western swing music, bar-room ballads, honky-tonk methods and traditional country western.

George Strait was born on May 18, 1952, in Poteet, Texas. He and his brother were raised by his father John Bryon Strait a junior high school teacher and rancher, whilst their mother and sister lived separately. Strait began playing music as a teenager, joining a rock ‘n’ roll garage band.

He graduated from Pearsall high school in the late 1960s, and enrolled at Southwest Texas State University in San Marcos but soon dropped out and eloped with his high school sweetheart, Norma. In 1971, Strait enlisted in the U.S. Army and continued his musical interest by joining the Army-sponsored band, Rambling Country also known as Santee when they played away from army base. Strait was discharged from the Army in 1975, and returned to San Marcos to complete his studies.

While in college Strait joined another band Ace in the Hole and made a few records for the independent Dallas-based record label, D. The songs produced by D turned out to be unsuccessful. In 1979, the same year he graduated from college, Strait he became friends with Erv Woolsey, a Texas club and former MCA Records employee. Woolsey steered a meeting between Strait and MCA executives which led to Strait’s contract with the company in 1980.

In 1981 Strait released his first single for MCA Records, entitled “Unwound”, which entered the top ten of the Hot Country Songs chart that year. The record featured two more singles; the number sixteen hit “Down and Out” and number three hit “If You’re Thinking You Want a Stranger (There’s One Coming Home)”.

Strait released his critically acclaimed Strait from the Heart, album in1982. It featured the first number one of his career, “Fool Hearted Memory” and the top five “Amarillo by Morning,” regarded by many as one of the greatest country songs of all-time. In 1983, Strait made his first appearance at the Houston Livestock Show and Rodeo and had twenty future appearances performing to over one million fans.

Strait’s success with hit singles placed him on the Top Ten charts straight through to the 1990s and 2000s. The success of “Fool Hearted Memory” was followed by hit songs such as “The Chair”, “All My Exes Live in Texas”, “Famous Last Words of a Fool” and “Baby Blue”. In 1985 he won CMA awards for album of the year and male vocalist (which he also won in the following year). Strait ended 1989 with the entertainer of the year CMA award.

In the early 1990s Strait produced a slew of Billboard country number one singles including “Love without End, Amen”, “I’ve Come to Expect It From You”, “If I Know Me” and “You Know Me Better Than That”. He was featured in the movie Pure Country in 1992 and his soundtrack single “I Cross My Heart” became one of his biggest smash hits to date. His four CD boxed set titled Strait out of the Box was released in 1995 and became one of the top five selling boxed sets in pop music. Strait continued his winning streak with his 1996 album “Blue Clear Sky”, CMA award winners “Check Yes or No” and “Carrying Your Love with Me”, and Billboard hit “Write this Down” amongst others.

The 2000s were no different as he scored more number one hit albums and singles including, “The Best Day,” “Go On”, “Run”, “Living and Living Well”, “She’ll Leave You With a Smile” and “Cowboys Like Us”, “I Hate Everything”. Strait won CMA awards for his Alan Jackson collaboration “Murder on Music Row” and 2005 duet “Good News, Bad News” with Lee Ann Womack. In 2006 he was inducted into the Country Music Hall of Fame.

Strait’s achievements include 38 hit albums, over 73 million recordings and RIAA certifications such as 13 multi-platinum records, 34 platinum and 38 gold albums.

Strait and his wife Norma had son George Strait, Jr. in 1981. Their daughter Jenifer born 1973 was killed in an automobile accident in San Marcos, Texas, in 1986. The Jenifer Lynn Strait Foundation w as established as a result and is used to support children’s charities in the San Antonio, Texas area. Strait also lost his older brother Buddy in April 2009. He and his wife have homes in San Antonio and Cotulla, Texas.