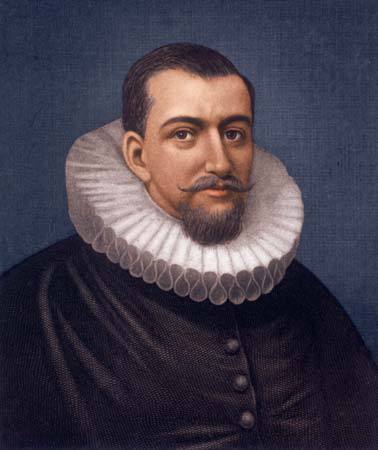 Henry Hudson (d. ca. 1611) was an English Sea Explorer and navigator in the early 17th century. Hudson may have been born in [London, England]. Little is known of his early life. He is thought to have spent many years at sea, beginning as a cabin boy and gradually working his way up to ship’s captain. After several voyages in the 1600s on behalf of English merchants to explore a prospective Northeast Passage to India, Hudson explored the region around modern New York City while looking for a western route to the Orient under the auspices of the Dutch East India Company.

In 1609, Hudson was chosen by the Dutch East India Company to find an easterly passage to Asia. He was told to sail around the Arctic Ocean north of Russia, into the Pacific and so to the Far East. Hudson could not complete his intended route due to the ice that had plagued his previous voyages, and those of many others before him. On September 6, 1609 John Colman a member of his crew was killed by Native Americans who shot him with an arrow to his neck. On September 11, 1609 he sailed into what is now New York City. The following day Hudson began his first ride up what is now known as the Hudson River.

Having heard rumors by way of Jamestown and John Smith, he and his crew decided to try to seek out a Southwest Passage through North America. In fact, no Northwest Passage to the Pacific existed north of the Strait of Magellan and south of the Arctic until one was created by the construction of the Panama Canal between 1903 and 1914. The Native Americans, who relayed the information to John Smith, were likely referring to what are known today as the Great Lakes. He explored the Hudson River – the first European to see the river was Giovanni da Verrazano for the king of France, Francis I in 1524 – and laid the foundation for Dutch colonization of the region.

In 1610, Hudson managed to get backing for yet another voyage, this time under the English flag. The funding came from the Virginia Company and the British East India Company. At the helm of his new ship, the Discovery, he stayed to the north (some claim he deliberately stayed too far south on his Dutch-funded voyage), reaching Iceland. Excitement was very high due to the expectation that the ship had finally found the Northwest Passage through the continent.

Hudson’s next expedition ranged further north in search of the Northwest Passage, to the Orient, leading to his discovery of the Hudson Strait and Hudson Bay. After wintering in the Canadian Arctic, Hudson tried to press on with his voyage in the spring of 1611, but his crew mutinied and cast him adrift, his ultimate fate is unknown.