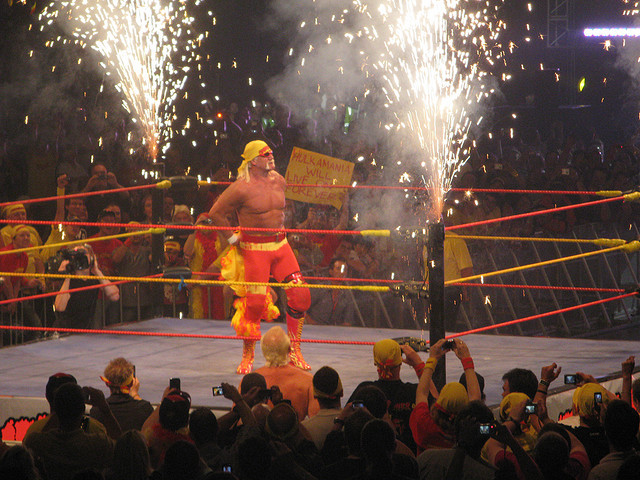 Terry Gene Bollea or as he is more popularly known Hulk Hogan was born on August 11, 1953. He is an actor and retired professional wrestler.

His wrestling career was at its peak in the 1980s and 1990s. During his years wrestling he has donned the persona Hulk Hogan, the working class hero and the villainous “Hollywood” Hogan. He was inducted in the WWE hall of fame in 2005 and has achieved many distinctions in wrestling including: twelve-time world heavyweight champion: a six-time WWF/E Champion and a six-time WCW World Heavyweight Champion and World Tag Team Champion with pro-wrestler Edge.

Hogan grew up in Tampa where he was raised by parents Ruth and Peter Bollea. He started watching professional wrestling at the age of 16 and attended cards at the Sportatorium. His idol at that point was “Superstar” Billy Graham. He was also an accomplished bass guitarist and played for several bands for an entire decade. He attended the University of South Florida but did not finish his degree. He spent much of his time at a local Gym where he met Mike Graham who convinced him to wrestle. He began training with Hiro Matsuda in preparation for his professional debut in the early 1980’s.

After a year of training with Matsuda he entered his first match against Brian Blair on August 10, 1977. He soon wore a mask and identified himself as the “Super Destroyer”. He would assume the name “the Hulk” after doing an interview on a talk show with the Incredible Hulk Star Lou Ferrigno the host described him as being mightier looking than the Hulk. He would soon use this as a part of his wrestling identity. Later Hogan would be added by Vince J Mcmahon who prefered that Bollea have a more Irish sounding name.

Between 1983-1993 Mcmahon used Hogan to promote the World Wrestling federation because of his charisma, very striking appearance and name, by this time Hulk Hogan. With Hogan the WWF gained and maintained its popularity and inevitably secured its place in popular culture.

He has been featured on the covers of Sports Illustrated, TV guide and people. He continued wrestling for almost two decades winning many championships and being cast for most of his career as a wrestling hero.

He then ventured into acting taking roles in movies such as Rocky III, No Holds Barred, Suburban Commando, Mr Nanny and 3 Ninjas: High Moon at Mega Mountain. His most recent exploit was in the reality TV show, Hogan’s Knows Best which documented his family’s activities. As of 2008 the reality TV show shifted focus to follow his daughter’s musical career and has been renamed Brooke Knows Best.

Bollea married Linda Claridge on December 18, 1983. They have two children Brooke and Nick. The couple filed for divorce in November 20, 2007. Linda declared that she decided to leave the marriage after it was revealed that Hogan had had an affair during the production of the reality TV show.

Bollea presently lives with his daughter Brooke who is currently starring in the VH1 reality TV show Brooke Knows Best. He is said to be suffering from health problems including back pains from his years of lifting heavy weights.