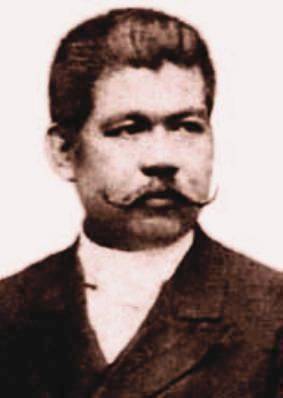 Marcelo H. Del Pilar was born on August 30, 1850, to cultured parents in Kupang, Bulacan, Philippines. He was a student at the Colegio de San José and later he attended the University of Santo Tomas, where he pursued a course in law and finished in 1880.

Del Pilar founded the newspaper Diariong Tagalog two years after finishing University, in 1882. His main goal with the newspaper was to propagate democratic liberal ideologies among the farmers and peasants. He defended José Rizal’s problematic writings in 1888 by issuing a pamphlet against a priest’s attack, exhibiting his sharp wit and scathing ridicule of clerical indiscretion. Del Pilar, from an early time, was motivated by a sense of justice against the abuses of the clergy, and attacked bigotry and hypocrisy, defending in court the impoverished victims of racial discrimination. His gospel supported work, self-respect and human dignity, and his mastery of his native language, Tagalog, enabled him to arouse the consciousness of the masses to the need for unity and sustained resistance against the Spanish tyrants.

Del Pilar came under severe clerical persecution in 188, and fled his country to Spain, leaving his family behind. In December 1889 he became the successor of Graciano Lopez Jaena as editor of the Filipino reformist periodical La Solidaridad in Madrid. He contacted liberal Spaniards who would side with the Filipino cause, in an attempt to promote the objectives of the paper, and under his editorial guidance, the newspaper expanded to include: removal of friar and the secularisation of the parishes; active Filipino participation in the affairs of the government; freedom of speech, of the press and of assembly; wider social and political freedoms; equality before the law; assimilation; and representation in the Spanish Courts, or Parliament.
The money to support the paper was soon exhausted, thus increasing Del Pilar’s difficulties, and there still were no signs of any immediate response from the Spanish ruling class. Before his death in Barcelona, on July 4, 1896, due to hunger and enormous privation, Del Pilar rejected the assimilationist stand and began planning an armed revolt. He affirmed this conviction, with fervour, saying: “Insurrection is the last remedy, especially when the people have acquired the belief that peaceful means to secure the remedies for evils prove futile.” These words, and the ideology therein inspired Andrés Bonifacio’s Katipunan, a secret revolutionary organisation.
Del Pilar’s militant and progressive outlook was inspired by the classic Enlightenment tradition of The French Philosophes and the scientific empiricism of the European bourgeoisie. Mush of this ideology was transmitted by the Freemasonry, to which Del Pilar subscribed.