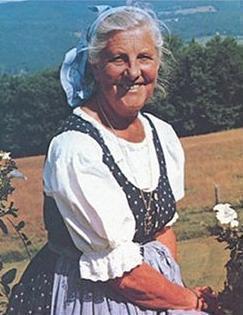 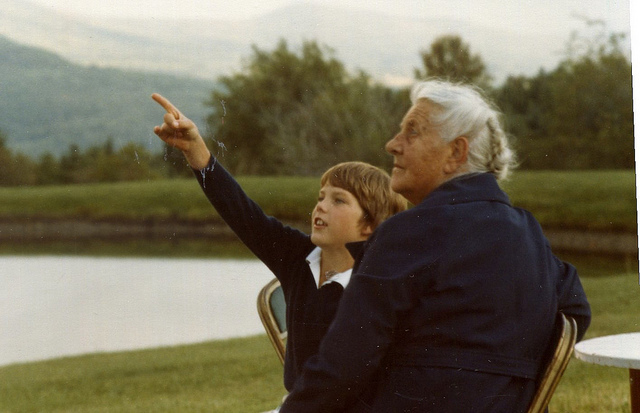 Baroness Maria Augusta von Trapp was born on January 26, 1905, on a train heading from her parents’ village in Tyrol to a hospital in Vienna, Austria. She was subsequently orphaned on her seventh birthday. She attended the State Teachers College for Progressive Education in Vienna at the age of 18, and graduated in 1923. She then entered Nonnberg Abbey, a Benedictine, Roman Catholic, monastery in Salzburg with the intention of becoming a nun. Still a novice, Maria was asked to teach one of the seven children of widowed naval commander Georg Ludwig von Trapp and his first wife, Agathe Whitehead von Trapp who had died from scarlet fever. Maria and George were later married on November 26, 1927.
In 1935, Trapp lost his fortune, after it had previously been safely invested in a bank in London. Georg, to help a friend in the banking business, Mrs. Lammer, withdrew the money from the English bank and deposited it in her bank. Her bank failed, shortly after, due to the economic pressures in Austria as result of German influence and other factors at the time. The Trapps dismissed most of their servants, moved into the top floor and rented the empty rooms to students of the Catholic University to survive. The Archbishop sent Father Wasner to stay with them as their chaplain and the family began turning its love of music into a career.
Their popularity came after performing at a festival in 1935. Shortly after the Nazi annexation of Austria in 1938, the family moved to Italy and then to the United States; their former home in Austria became the headquarters of Heinrich Himmler, who was one of the most powerful Nazi men in Germany.

The initially called themselves the “Trapp Family Choir,” when they began to perform in the United States and Canada. The gained attention after a performance in New York City at The Town Hall on December 10, 1938. Following an unsuccessful engagement with Charles Wagner, they signed on with Frederick C. Schang. Thinking the name “Trapp Family Choir” was too churchy, he Americanised their repertoire, and at his suggestion the group changed its name to the “Trapp Family Singers.” By then, their family had included ten children, and the entire band became famous in a new context and was soon touring the world.

After the war, they founded the Trapp Family Austrian Relief, Inc., which sent hundreds of thousands of pounds of food and clothing to impoverished Austrians. In the 1949s, they moved together as a family, to Stove, Vermont, where they managed a music camp when they were not touring. The Trapp family made a series of 78 rpm discs for RCA Victor in the 1950s, some of which were later issued on RCA Camden LPs. The family also made an appearance on an Elvis Presley Christmas record, and in 1957, the Trapp Family disbanded and went their separate ways. Maria and three of her children went on to become missionaries in the South Pacific.

In 1944, Maria applied for U.S. Citizenship. George, however, never filed to become a citizen. A few years after her husband’s death in 1947, Maria von Trapp died on March 28, 1987, of heart failure in Morrisville, Vermont, three days after surgery