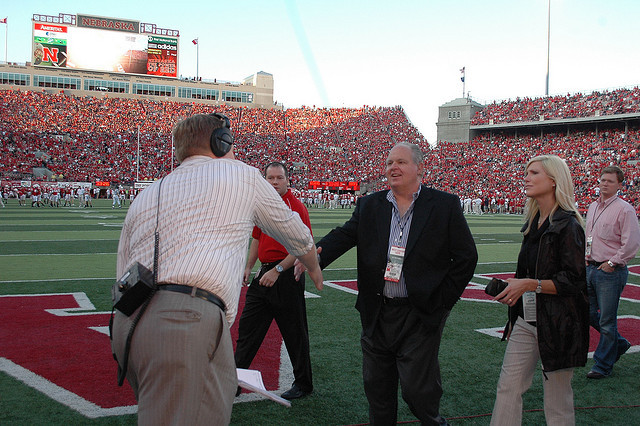 Marta Limbaugh was born on December 10,1960 and is known as the third wife of Rush Limbaugh, political analyst and radio personality. When Marta met Rush Limbaugh, on the Internet through CompuServe in 1990, she was a married aerobics instructor from Titusville, Florida. Not much is known about the elusive third wife of the popular media personality, Rush Limbaugh, as she was not very social while living in Palm Beach.
She graduated with a journalism degree from the University of North Florida, and worked in 1993 as an intern at Jacksonville’s “Florida Times-Union.” She has been married three times and had a son and daughter before meeting and marrying Rush Limbaugh, with whom she has no children.
The couple, Marta and Rush Limbaugh, were married by Supreme Court Justice, Clarence Thomas, at his home in Virginia on May 27, 1994, following Marta’s divorce from Tom Fitzgerald in 1992. Among those invited were Washington’s political odd couple, James Carville and Mary Matalin.

Marta put the money she had earned marketing Limbaugh’s neckties into “Vent,” a how-to magazine for Gen Xers, in 1997. She hired and fired a managing editor before having even moved into offices in the Esperante Building in West Palm Beach and subsequently fired a writer and art director. When a “Post” reporter phoned her in September 1997, she stated that Vent’s first issue would be released “really soon” and cut the call off. Other newspapers besides “Post” have also reported similar treatment.

The magazine’s first issue was launched in March 1998, but failed only three issues later in October. Shocked employees were greeted with a note on the office’s door, informing them of the closing down of the magazine, which was due to her needing the time to tend to her teenage son, who had broken his leg.

Besides the occasional dinner outing, Marta was rarely seen with her husband, Rush, in public and the two were said to have lived in separate houses on adjoining lots while married to each other. Rush Limbaugh, after ten years of marriage, announced his separation from Marta on air on June 11, 2004, claiming that he asked her for the divorce. However, other sources state that Marta was the one who first moved out of their living arrangement. The couple finally divorced on December 21, 2004, in Monroe County, Florida. Since the divorce, Marta has done well for herself in Real Estate