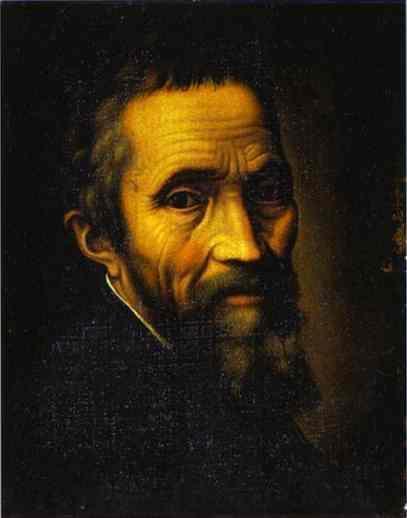 Michelangelo di Lodovico Buonarroti Simoni commonly known as Michelangelo was a painter, sculptor, architect, poet, and engineer. He is celebrated as one of the greatest sculptors of the Italian Renaissance and one of its greatest painters and architects. He is often considered a contender for the title of the archetypal Renaissance man, along with his rival and fellow Italian Leonardo da Vinci.
Some of his famous works are the La Pietà (1499 masterpiece found in St. Peter’s Basilica church in Vatican City) and David (1501-1504) sculptures; and the fresco works of scenes from Genesis on the ceiling and The Last Judgment on the altar wall of the Sistine Chapel in Rome.

Michelangelo was born March 6, 1945 in an Italian village called Caprese; his father Ludovico Buonarroti Simoni was the resident magistrate. A few weeks after Michelangelo’s birth the family moved to Florence and Michelangelo’s mother died when he was six.

In 1488 after much protest from his father, Michelangelo was formally apprenticed to Domenico Ghirlandaio the most modern painter in Florence, for three years.
In 1489 Ghirlandaio received a request from Lorenzo de’ Medici, de facto ruler of Florence, to provide his two best pupils; Ghirlandaio sent Michelangelo and Francesco Granacci. From 1490 to 1492, Michelangelo attended the Humanist academy and studied sculpture under Bertoldo di Giovanni. At the academy, Michelangelo was influenced by major philosophers and writers including Marsilio Ficino, Pico della Mirandola and Angelo Poliziano.

At sixteen years Michelangelo sculpted the reliefs Madonna of the Steps (1490–1492) and Battle of the Centaurs (1491–1492), showing his versatility in art at such a young age. He began to study anatomy under the tutelage of the prior of the Santo Spirito church when Lorenzo de’ Medici passed in 1492. Michelangelo left the security of the Medici court and returned to his father’s house. In 1493 he presented the prior with a carved wooden crucifix as a gift.
In 1494 Michelangelo went to work on the carving of the last small figures of the Shrine of St. Dominic, in the church dedicated to that saint and at the end of the year he return to Florence where he worked on two small statues, a child St. John the Baptist and a sleeping Cupid. St. John the Baptist was sent to Rome and was impressive enough to get Michelangelo and invite to the city.

From Florence to Rome

In Rome Michelangelo carved the first of his major works, the Bacchus (Florence, Bargello) and the St Peter’s Pietà. The Pietà brought instant fame and he returned to Florence in 1501 as an illustrious sculptor, remaining there until 1505. During these years he was extremely active, carving the gigantic David (1501-4), the Bruges Madonna (Bruges, Notre Dame), and beginning the series of the Twelve Apostles for the Cathedral which was commissioned in 1503 but never completed (the St Matthew is in the Academia). He also painted the Doni Tondo of the Holy Family with St John the Baptist (Florence, Uffizi) and made the two marble tondi of the Madonna and Child (Florence, Bargello; London, Royal Academy).

In 1508 Pope Julius II commissioned Michelangelo to decorate the ceiling of the chief Vatican chapel, the Sistine, a project he completed four years later. He then returned to carving Moses and two Slaves in the tomb of Julius, works that almost commissioned forty years of his life and ended up being incomplete due to differences with Michelangelo and Julius’ family.

Michelangelo went on to work on the Medici Chapel for two young Medici dukes. It contains two tombs, each with an image of the deceased and two allegorical (symbolic) figures: Day and Night on one tomb, and Morning and Evening on the other.
He continued in his last years working on commissions from the Pope, including additional elements to the Sistine Chapel, and rebuilding of the Capitol area, the Piazza del Campidoglio. He died in Rome February 12, 1564 and was buried in Florence.