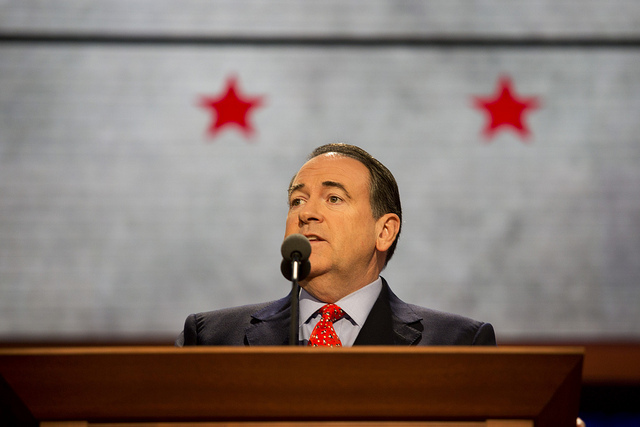 Photo by NewsHour
Mike Huckabee was the 44th Governor of Arkansas who served from 1996 to 2007. He is a republican, author, political commentator and media personality. Huckabee is the host of Fox Network’s Huckabee and radio host of Huckabee Report on the Citadel Media Network. Huckabee is also an author of several books including the top ten New York Times bestseller “Do the Right Thing”; he is a public speaker and an ordained Southern Baptist minister.
Huckabee has received several honors for his accomplishments. In 2005 he was named as one of the ‘Public Officials of the Year’ by Governing Magazine, and listed as one of Time Magazine’s five best governors in America. Huckabee received the American Association of Retired Person’s Impact Award and in 2007, he was presented with the Music for Life Award by the National Association of Music Merchants (NAMM) for his commitment to music education.
In 2008 Huckabee ran for President in which he finished second to John McCain.

Michael Dale Huckabee was born on August 24, 1955 in Hope, Arkansas to parents Mae Elder and Dorsey Wiles Huckabee. He has a sister, Pat (Harris) who is a teacher.
Huckabee was educated at Ouachita Baptist University where He graduated magna cum laude with a bachelor’s degree in Religion. He then attended the Southwestern Baptist Theological Seminary in Fort Worth, Texas but dropped out after only one year to pursue his career in broadcasting; something he had started at age fourteen when he worked at a local radio station.
He has two honorary doctoral degrees: a Doctor of Humane Letters, received from John Brown University in 1991, and a Doctor of Laws from Ouachita Baptist University in 1992
Huckabee was elected Governor of Arkansas Boys State in 1972 and was student council vice president at Hope High School during the 1971-72 school years; in 1972 he assumed the role of council president, held until 1973.

In 1996 upon the resignation of then governor Jim Guy Tucker Huckabee became the 44th governor of Arkansas and one of the youngest in the country. Huckabee was elected to a full four-year term as governor in 1998, winning the largest percentage of votes ever received by a Republican nominee in Arkansas; he was re-elected to a second four-year term in November 2002. Huckabee was elected lieutenant governor in a 1993 special election July 27th and was elected to a full four-year term in 1994. He became the fourth Republican to be elected to statewide office since Reconstruction.
As governor, Huckabee passed the legislation providing health care benefits for children whose parents did not qualify for Medicaid; he increased state spending by extending health care coverage for lower income children and raised sales and other taxes; he also provided support for the proposal of the “FairTax” movement.

After battling with Type 2 diabetes in 2003, Huckabee’s renewed strength sent him on the 2007 presidential campaign. In January 2007 Republican Huckabee announced his run for the White House and by August he was in second place by eighteen percent. On January 3, 2008, Huckabee won the Iowa Republican caucuses, receiving 34% of the electorate and 17 delegates, but by his February win of the Louisiana Republican Primary, Huckabee was not awarded any delegates since he fell below the 50% threshold. On March 4, 2008, Huckabee withdrew from seeking the candidacy.
In 2008 Huckabee was hired as a political commentator on Fox News Channel and also released his book Do the Right Thing: inside the Movement That’s Bringing Common Sense Back to America, in the latter part of the year. His show Huckabee also debuted on Fox September 27, 2008. In 2009 Huckabee premiered The Huckabee Report, on ABC Radio Networks.

Where is Huckabee Now

Huckabee spent ten years as Governor of Arkansas and currently lives with his wife, Janet, in North Little Rock. They have three grown children: John Mark, David and Sarah.
In 2009 Gallup Organization confirmed the former governor’s status as the pollsters’ front-runner for the 2012 Republican presidential nomination. From his performance in 2008, Huckabee is looked on as a favorite for the Republican nomination. In Gallup’s survey it was reported that 71 percent of Republicans would cast their vote for Huckabee, noting him as the only Republican that has a 50 percent vote of persons that consider him qualified for president.
Huckabee is currently on tour promoting the release of his new book, “A Simple Christmas”.