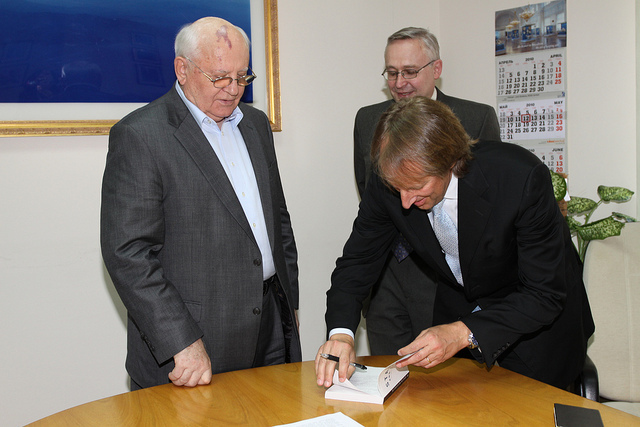 Photo by veni markovski
Russian politician and President Mikhail Gorbachev was the second-to-last General Secretary of the Communist Party of the Soviet Union, serving from 1985 until 1991, and the last head of state of the USSR, serving from 1988 until its collapse in 1991. He achieved national recognition as member of the Communist Party, the dominant political party of the former Soviet.

Mikhail Sergeevich Gorbachev was born into a peasant family in the village of Privolnoe, near Stavropol, Soviet Union, on March 2, 1931. As a teenager, he worked driving farm machinery at a local machine-tractor station.

In 1952 Gorbachev joined the Communist Party of the Soviet Union and enrolled at the Moscow State University, where he graduated in 1955 with a degree in law.

Gorbachev became an active member of the Communist Party and was appointed the First Party Secretary of the Stavropol Kraikom in 1970. In this position he helped reorganize the collective farms, improved the living conditions of workers, expanded the size of their private plots, and gave them a greater voice in planning.

In 1974 Gorbachev assumed the post of First Secretary for the Stavropol Territorial Party Committee, and became one of the most visible and active members of Politburo in 1979; his promotion reflected the highest authority in the country, and received full membership in 1980.

In 1985 he was elected General Secretary by Politburo; Gorbachev’s first steps as head of the party were designed to improve economic productivity, he proposed a “vague program of reform”.
One of the first reforms Gorbachev introduced was the anti-alcohol campaign, designed to fight widespread alcoholism in the Soviet Union. Certain liquor prices were increased and sales restricted resulting in decreased sales and government revenue and a loss of 100 billion rubles.

As Prime Minister Gorbachev sought to establish better relations with the United States, this was marked by Gorbachev’s 1988 visit to New York and a visit to Moscow by President Ronald Reagan; Gorbachev was awarded the Nobel Peace Prize in 1990 for his contribution to the Cold War and dissolution of the Soviet Union. While Gorbachev’s political initiatives were positive for freedom and democracy in the Soviet Union and its Eastern bloc allies, the economic policy of his government gradually brought the country close to disaster

In August 1991 a group of Communist Party conservatives which included Prime Minister Valentin Pavlov captured Gorbachev while he was on vacation in the Crimea and moved to seize power. By the end of 1991, the Soviet Union had fallen apart with Ukraine and the Baltic states declaring themselves as independent. Gorbachev formally resigned his remaining political office in December 1991.

In September 2008 Gorbachev and billionaire Alexander Lebedev announced intentions to form the Independent Democratic Party of Russia confirming their plans in May 2009.

Gorbachev married Raisa Titarenko whom he met whilst in university in September 1953. Their only child is daughter Irina Mihailovna Virganskaya in 1957. Raisa Gorbachev died of leukemia in 1999