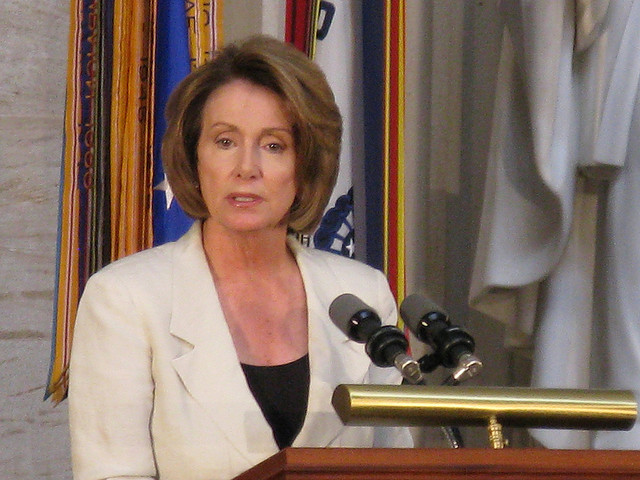 Congresswoman Nancy Pelosi made history when she became the first woman Speaker of the United States House of Representatives. She is also the first Italian-American and first Californian to serve as Speaker and is a member of the Democratic Party.
In 2002 Pelosi was elected the House Minority Leader, a post that she held until 2007, and was again noted as the first female to hold that post. Since 1987, she has represented California’s Eighth District, which consists of a large part of the City and County of San Francisco. The district was numbered as the 5th during Pelosi’s first three terms in the House.
Pelosi is second in the line of presidential succession, following Vice President Joe Biden, which makes her the highest-ranking female politician in American history.

Nancy Pelosi (nee D’Alesandro) was born on March 26, 1940, in Baltimore, Maryland. Her father Thomas D’Alesandro, Jr., served in Congress and was the Mayor of Baltimore for twelve years. Pelosi’s brother Thomas D’Alesandro III later served as Mayor of Baltimore from 1967 to 1971. Pelosi has four other siblings.
Pelosi was educated at Institute of Notre Dame high school and Trinity College (now Trinity Washington University) in Washington, D.C. in 1962. Pelosi gradually got into politics starting out with an internship at the office of Senator Daniel Brewster (D-Maryland) and Steny Hoyer. From 1976 t0 1996 she served as a California representative to the Democratic National Committee. She also served as the state and northern chair of the California Democratic Party.

Pelosi represents one of the safest Democratic districts in the country since the Democrats have held the seat since 1949 without any serious challenge. Since winning the seat in 1988 Pelosi has been easily reelected 10 times winning by an average of 75 percent of the vote. She has not participated in candidates’ debates since her 1987 race against Harriet Ross
In 2001, Pelosi was elected the House Minority Whip, becoming the first woman in U.S. history to hold that post. One year later she was elected House Minority Leader upon the resignation of Dick Gephardt and became the first woman to lead a major party in the house. During her leadership Pelosi opposed the Bush administration proposal for Privatization of Social Security, and after becoming House Speaker in 2007 she held firm against impeachment proceedings against the president.
On November 16, 2006, Pelosi was unanimously chosen as the Democratic candidate for Speaker, effectively making her Speaker-elect. With her election win January 3, 2007, Pelosi became the first woman, the first Californian, and the first Italian-American to hold the Speakership; she was reelected in 2009 and remains the leader of the House Democrats.

Pelosi met her husband Paul Pelosi while they were in college. The couple was married on September 7, 1963; they have five children: Nancy Corinne, Christine, Jacqueline, Paul, and Alexandra, and seven grandchildren.