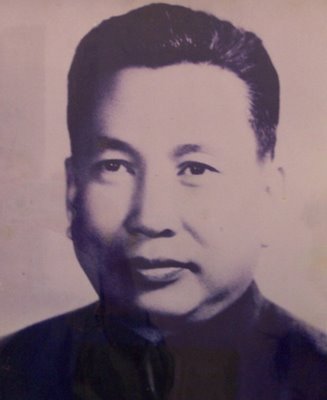 Pol Pot was born Saloth Sar on May 19, 1928, in Konpong Thom, Cambodia to wealthy parents with political links. Pol Pot often denied his identity as Saloth Sar, perhaps in an attempt to protect his family. By 1963 he had adopted his new name, and even after he had risen to premiership, people were still unsure of his real identity.

Pol Pot was educated by Buddhists and at a private Catholic institution. He went on to attend a technical school to learn carpentry, and later obtained a government scholarship to study radio and electrical technology in Paris. While in France, however, Pol Pot spent less time with studies and more time involved with the Communist Party.

When Pol Pot returned to Cambodia in 1953, he drifted into the Vietnamese-influenced “United Khmer Issarak Front” of Cambodian Communists, one of many Cambodian groups that opposed French control of Cambodia as well as the government of Prince Norodom Sihanouk. As his hatred for intellectuals grew, and after Cambodia won its independence from the French in 1954, Pol Pot became involved with the Khmer People’s Revolutionary Party, the first Cambodian Communist party.

In a secret meeting on September 1960, at the Phnom Pehn railroad station, Pol Pot and his followers founded the “Workers Party of Kampuchea.” For the following thirteen years Pol Pot and other WPK members disappeared from public view and set up their party in a remote forest area. In 1966 the WPK was renamed: The Communist Party of Kampuchea. Subsequently the CPK led many demonstrations against the Sihanouk administration, which caused the Sihanouk to order the execution of dozens of CPK members. In December 1969 and January 1970 Pol Pot and other CPK leaders prepared to defeat Sihanouk. However, the military in Phnom Penh beat them to it in March 1970, overthrowing Sihanouk and bringing Lon Nol to the Cambodian presidency.

Killing His Own People

For nearly a year, Pol Pot and other Cambodian Communists struggled for power in the new state of “Democratic Kampuchea.” After Sihanouk decided to step down as head of state, in April 1976, a new Democratic Kampuchea government was proclaimed, and Pol Pot became premier. His authority did not go unchallenged however, but by the beginning of November 1976, Pol Pol began to remove many of his rivals, including the cabinet ministers and other top party leaders. Meanwhile, his reform policies drove many Cambodians from major cities and forced tens of thousands into labour. People were denied food and medical care, and massacres of suspected opponents occurred. Pol Pot became responsible for the deaths of over one million Cambodians–nearly 20 per cent of his country’s total population.

Fall of a Dictator

After being forced into exile with other DK leaders, Pol Pot was sentenced to death in absentia for the murder of his own people. As the world focused increasingly on Cambodia, Pol Pot resigned as DK premier in December 1979, while remaining party secretary and head of CPK’ military commission, making him the overall commander of the DK’s thirty-thousand man force battling the Vietnamese in Cambodia. After this, little is known of Pol Pots activities and after several years of living underground, he was captured in June 1997. He was subsequently sentenced to life in prison, however, he died of heart failure with under house arrest on April 15, 1998.