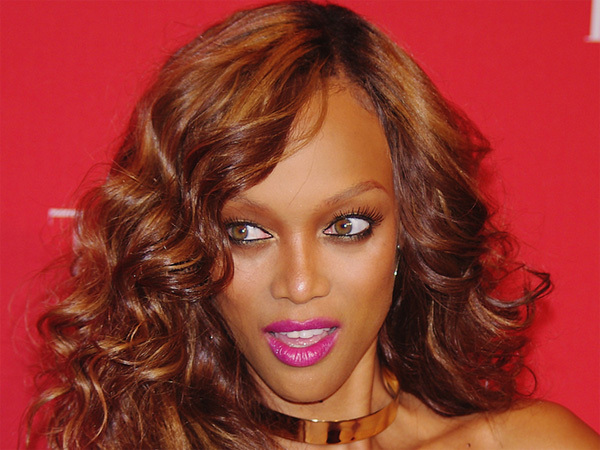 Tyra Lynne Banks was born on December 4, 1973 in Inglewood, California to Karolyn and Donald Banks. They divorced in 1980, when Tyra was 6 years old however her family relationship stayed friendly. Her mother had remarried to Clifford Johnson Banks attended John Burroughs Middle School and graduated in 1991 from Immaculate Heart High School in Los Angeles. She was accepted by colleges such as USC and UCLA for television producing.

She began modeling in the 11th grade and later went to Paris, France to do some runway modeling. Designers were so entranced by her presence on the runway that she was booked for an unprecedented twenty-five shows which was a record in the business for a newcomer. She has done extensive print and runway work for fashion and advertising giants such as Anna Sui, Coors Light, CoverGirl, Badgley Mischka, Bill Blass, Cynthia Rowley, Chanel, Christian Dior, Dolce & Gabbana and Donna Karan. She had even appeared on the covers of high-fashion magazines such as Vogue, Harper’s Bazaar, Cosmopolitan and Elle. Banks retired from modeling in May 2005 to concentrate on her television career. She walked the runway for the final time at the 2005 Victoria’s Secret Fashion Show. Tyra’s television career started with her appearance on the Fresh Prince of Bel Air’s fourth season. Other TV credits include Felicity, MADtv and Nick Cannon’s Wild ‘n Out. Her first big screen role came in 1994 when she co-starred in the drama Higher Learning and then she went on to co-star with Lindsay Lohan in the Disney film Life-Size. Bank’s has confirmed that she will appear in the fourth episode in Gossip Girl in the 3rd season as Ursula Nyquist, a larger than life actress who’ll work with Serena. Tyra has appeared in several music videos, including Michael Jackson’s “Black or White” and Tina Turner’s “Love Thing”. She paid $30,000 of her own money to finance the music video for her first single “Shake Ya Body,” which appeared on her show “America’s Next Top Model.” Later, on her talk show, she said, “I can’t believe I wasted six years of doing something that I didn’t finish…I was almost able to release my album T.Y.R.A., but since my music career hit rock bottom, I quit.” She is credited with performing the theme song to America’s Next Top Model.

She dated John Singleton. Currently, Banks can be seen on television as the hostess, judge and executive producer of The CW Television Network show America’s Next Top Model Took second place by the readers of Black Men Magazine for “The 10 Sexiest Women of the Year.” Received the Michael Award for “Supermodel of the Year.” She was the maid of honor at the wedding of best friend Kimora Lee to Russell Simmons.