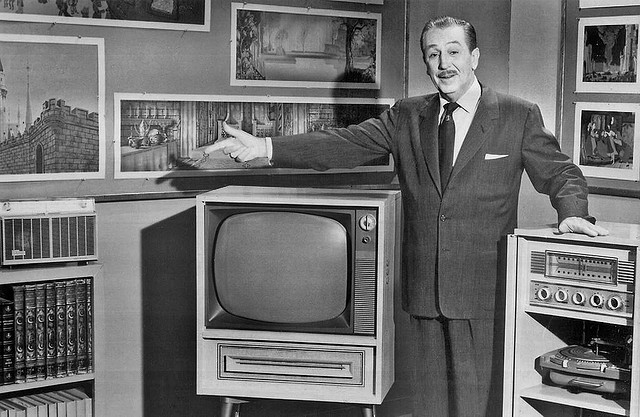 Walter Elias “Walt” Disney was born on December 5, 1901 to Elias Disney an Irish Canadian and Flora Call Disney a German American in Chicago. Walt Disney was known as a film producer, the co-founder of Walt Disney Company, was married to Lillian Bounds and died at the age of 65 in Burbank California.

Walt Disney’s father Elias Disney travelled from Ontario to the United States in 1878 searching for gold in California, he later settled on being a farmer with his parents until 1884. He worked for Union Pacific Railroad and then got married to Flora Call on January 1, 1888 in Florida. The family moved to Chicago in 1890 there Elias received financial assistance from his brother who also lived in Chicago. When Walt was four years old his father Elias moved to a farm in Marceline Missouri with his family.
In 1911 the Disney’s moved to Kansas City where Walt and his sister Ruth attended the Benton Grammar School, there Walt met Walter Pfeiffer. Through association with the Pfeiffers Walt was exposed to the world of motion pictures.

The Disney’s moved back to Chicago when Elias acquired shares in the O-Zell jelly factory. Walt commenced his freshman year at McKinley High School while taking night courses at the Chicago Art Institute. At school Disney was the cartoonist for the newspaper. His cartoons focussed on World War I. At the age of sixteen Disney dropped out of high school to join the army but his application was denied as he was not of age. Sometime after that Walt along with one of his friends decided to be apart of the Red Cross movement. Walt was sent to France for a year to drive an ambulance after he became apart of the Red Cross.
In 1919 Walt left home in the hopes of finding work and moved back to Kansas City to start his artistic career. He started a career in the newspaper making drawings of political caricatures or comic strips. However he did not find any employer willing to hire him as an artist or as an ambulance driver, he got a temporary job courtesy of his brother Roy who was employed at a bank in the area. Walt worked at the Pesmen- Rubin Art Studio where he made advertisements for magazines, newspapers and movie theatres. It was at this art studio that Walt met another cartoonist called Ubbe Iwerks. Both men decided to open their own commercial company when both their contracts at the Pesmen – Rubin Studio expired. The name of the company was called Iwerks – Disney Commercial Artists in January 1920. The company was a short lived venture as they had a rough start, Walt moved to Kansas City Ad Company to earn some money; Iwerks joined him a short time later. It was at the Kansas City Film Ad Company that Walt developed an interest in the field of animation and later started his own animation business; he recruited Fred Harman a fellow co-worker at Kansas City Film Ad Company as his first employee. Both Walt and Harman secured a deal with the most popular show man in the Kansas City Area, Frank L. Newman to broadcast their cartoons at Newman’s local theatre.

Walt’s cartoons became vastly popular in the Kansas City area. Walt acquired his own studio and then set out to establishing a studio in Hollywood California. His dream was realized and thus he was able to develop and produce several animations.

In 1932 Walt received a special Academy Award for his Mickey Mouse creation.

Walt had two daughters, Diane Marie Disney and Sharon Mae Disney who Walt and his wife Lilly adopted a year after Diane was born.