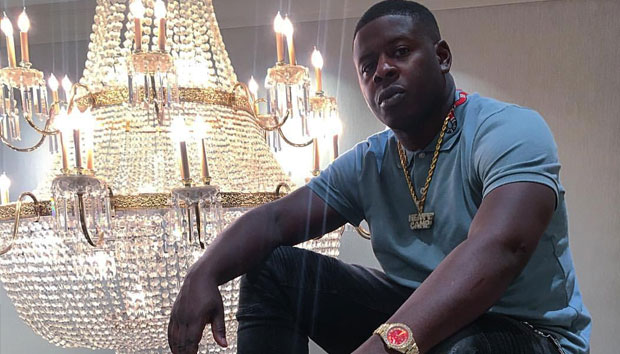 Blac Youngsta is an American trap and hip hop rapper. He was born on 8 April, 1990 in Memphis, Tennessee. His real name is Samuel M. Benson. He became famous after rapper Yo Gotti had noticed his talent and decided to bring him on his tour for two months. After that, Yo Gotti signed him to his label CMG Records.

Even though Youngsta was famous in his hometown thanks to McMillan Street block parties, which he hosted to honor young black people killed on the streets, he reached musical success after signing deals with Yo Gotti’s and Epic Records labels.

He recorded his first mixtape called Fast Brick in 2012. Three years later he released singles like “Booty” and “Heavy” and six mixtapes. In 2017 he was signed to Epic Records which helped him record his first two studio albums called 223 and Fuck Everybody 2. They were a big success for this artist since both of them went on Billboard 200 chart.

His single “Booty” went on Billboard Hot 100 chart. Thanks to his rise in fame he collaborated with big names like Jeezy, Trey Songz, Chris Brown, Lil Yachty and Yo Gotti. Youngsta has millions of fans who show him support mostly on his social media.

This rapper had a very hard childhood. He was forced to sell drugs and do illegal things just to survive. In 2015 he was shot three times by unknown person, after which he decided to respect his life a lot more. Blac Youngsta is also famous for his feud with another rapper from Memphis called Young Dolph.

Blac Youngsta was born on 8 April 1990, in Memphis, Tennessee in crime loaded McMilan Street, where he spent his childhood. He and his three little brothers were raised by his grandparents. There are no information about his biological parents.

Even though he lived off of grandpa’s salary and grandma’s pension, the family was always short with money, so Blac had to start working when he was only 7 years old. He worked at a grocery store where he would stack food and fold boxes for just 10 dollars a week. He would often steal food or place false orders to bring home leftovers so he could feed himself and his brothers. That went on for some time, but he would get caught and then fired. After some time, his boss Mr. Jones would hire him again, but eventually he would be fed up with stealing and Youngsta would be without a job once again.

After that, he had realized that he had to find money somewhere else, so he started selling cocaine and weed on the streets. He was arrested multiple times for drug and gun possession, so he spent some time in jail. The longest he was there was around a year. Youngsta was very depressed and had some suicidal thoughts, but he decided to focus on making music.

His first attempt at rapping created a mixtape later called Fast Brick. He released a song called “Heavy” after his younger brother died. In the song he is talking about his rough childhood, his love for the brother and his pain that the death brought him. After Blac Youngsta had become famous, he started using all the painful events from his childhood as an inspiration for his music. To be focused, he brings items he is rapping about to the music studio. One of his songs, “One Bedroom House”, talks about his childhood home and hunger he felt during years spent in it.
When he had come out of the jail he decided to make a career out of his rap abilities.

Blac Youngsta’s career started in 2011. During that time he would organize parties in his street to commemorate young black people that were killed due to gang related activities. A year later he released his first mixtape called Fast Brick. During the same year he released a sequence to it called Fast Brick 2. Even though he was famous in his neighborhood, he wasn’t successful the way he expected himself to be.

All of it changed after he released his third mixtape called Fast Brick 3 and his single “Heavy”. The song was very emotional, talking about his brother that was killed on the streets of McMilan Street. Blac stated in an interview that he felt guilty for the death of his brother since he was the one on the streets while his brother was a good kid who wanted to go to military one day.

His music was then noticed by a rapper called Yo Gotti. He decided to bring Blac on his tour for two months after which he offered him a contract with his record label Collective Music Group in 2015.
Thanks to the offer, Blac released songs like “I Swear to God2 and “One Bedroom House” that talk about his childhood.

A year later, a rapper published his first studio album called Young and Reckless. Prior to its release he gave out a single called “Beat It”. On 8 September 2016, he published his forth mixtape called F*ck Everybody. All of his projects were a huge success, so in 2017 he signed a deal with a big company called Epic Records. That led to him releasing a new mixtape called I am Innocent and an EP Heavy Camp on September 2017.

The same year he published three singles- “Hip Hopper”, “Venting” and “Booty” while releasing his sixth mixtape called Can’t Fake the Real on which guests like DaBoyDame and Mozzy were featured. Another important project of his with Epic Records was a mixtape Illuminati.

Throughout his career he collaborated with artists like Boosie Badazz, Quavo, Young Thug, Rich Homie Quan and Migos. His album 2.23 was very successful, reaching Billboard’s Top 50 chart. His You Tube channel now has over 22 million subscribers, while his net worth is estimated at 1.5 million dollars.
In 2018 he released his new single called “Who Run It”.

Blac Youngsta doesn’t like to talk about his personal life. Except for his childhood, there are no more information out there. During his career there were some rumors that the rapper is gay, started by a trans-model Bnell Williams, but Youngsta denied all of them, stating that he has kids.

His life is full of controversies. He started a feud with another Memphis rapper, Young Dolph, after he proclaimed himself King of Memphis. To defend his friend, Yo Gotti, Youngsta twitted some angry things to his fellow colleague.

The situation escalated quickly after Blac showed up on Dolph’s street with his friends, recording themselves while cursing and waving their guns. In 2017, Dolph’s SUV was shot a hundred times, but luckily the rapper survived since his car was bulletproof. The police accused Blac, Fedrick Black and Antavius Gardner for the act, after which the rapper turned himself to the police, in May 2017.

He was released a week later, but his friend Yo Gotti was latter suspected to be involved in a shooting directed at Dolph in 2018. Blac latter stated that the feud between these Memphis rappers was over.

On 8 March 2016, Blac was arrested after a large sum of money was raised from a bank in Atlanta. The police accused him of committing a fraud but everything was settled after they realized the whole event was a mistake. Blac wanted the money to buy a new Mercedes-Benz.

The same year he was heavily criticized for posting a picture of himself being crucified. The rapper later explained that he wanted to film a music video as a tribute to the famous rapper Tupac.

Today, Blac lives in Los Angeles, California. He earns more than 200 thousand dollars a year. His net worth is estimated to be around 2 million dollars. He enjoys fast and expensive cars. He bought his grandma a house to thank her for everything she did for him when he was a kid.

He has 3 million followers on Twitter and 365 thousand subscribers on his You Tube channel.