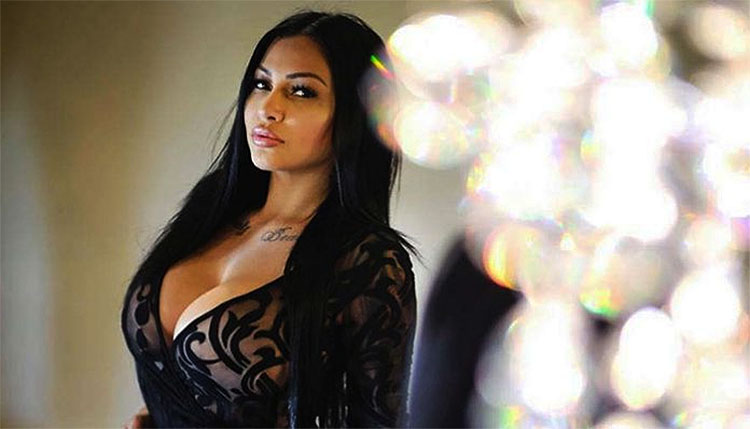 Brittanya Razavi is an American social media star, Internet sensation and an actress. She was born on July 7th in 1985 in Oxnard, California and currently she lives in Southern Cali. She is also recognized under names Brittanya O-Campo (which is her birth name) and Brittanya McCall Razavi. She is followed by 10 million people on Instagram.

We don’t know much about this actress and business woman, when it comes to her childhood, due to the fact that she doesn’t like to share anything about her personal life, which is a little bit contradicting, knowing the fact that she shares her life on social media every day.

It is a public knowledge that she is the youngest of five children in her family. Her siblings’ names are not familiar, except for her older sister Tiffany O-Campo who is a business woman as well. Even though she was in a well situated family, everything changed when she was only fifteen years old, after her father had gone to jail.

That has affected the whole family, leaving Brittanya’s mother to take care of the children completely alone, without anybody’s help. Even though Razavi was the youngest, she has tried to help her mother by moving out and starting to work.

The lack of father figure is speculated to be the reason for her, sometimes, reckless behavior. She has had her first child when she was just sixteen. The child was taken care of by her grandfather.

Brittanya has managed to gain a lot of attention on her social media, over the years. 2009 was the year in which she marked a success on traditional media, as well. Because of her following, she was able to debut in VH1 reality television show Rock of Love Bus and Charm School, where she tried to gain affection of Bret Michaels, front man of the band Poison, and I Love Money.
After that, she has gained a lot of publicity which she took advantage of, the best way possible. Because of her attractive looks and appearances on TV, her following has become even bigger, reaching 10.2 million on Instagram, 250k on Twitter and over 5 million on Facebook.

Many companies saw her curvy body covered in tattoos, piercings and her growth on social media as a chance to collaborate with her. Because of that, she was featured on covers of Savage Tattoo, Rebel Ink, Tattoo Energy and Spire Magazine, among others.

Razavi has taken those opportunities to develop her own business. She promotes products of famous brands on her social media, has a real estate business, and co-owns an online store 187 Avenue, where she sells her merch and accessories. She has co-authored a book called Millionaire Self Talk, and if that was not enough, she owns a website where people can pay to watch her private videos, called BrittanyaTV.

Because of her ability to develop a brand of her name, Forbs has estimated that her net worth was 6 million dollars in 2017. Just a year later, that number sky rocketed to fascinating 10 million.

Even though she never disclosed any information about her private life, there is a fair share of rumors that surround her. During 2010. she was sentenced to six months in jail, after she attacked a woman with a chalice.

She was in a relationship with Nico Vaquez, but that did not last long. After that, she got married to Moe Razavi and reportedly has four children with him, even though on her social media she was seen with only two of her children.

People are fascinated with her body and style. Brittanya is known for her round figure, tattoos, piercings and dimples on her face. She is 5,3 feets tall, and has hazel eyes.