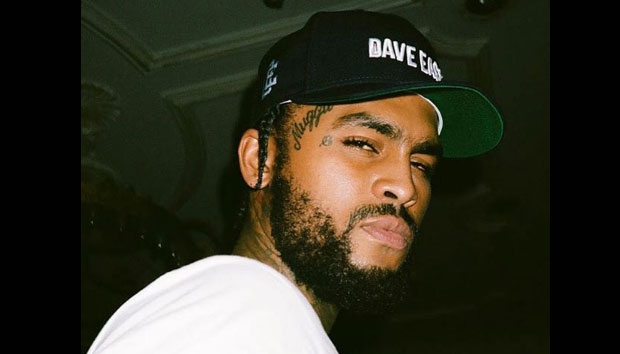 David  East is an American rapper. He was born on June 3, 1988 in Harlem, New York. His real name is David Brewster Jr. but people know him by his stage name Dave East.

He has always been interested in music, but his career started in 2010. He released his first mixtape around that time. It was called Change of Plans. The following years were not very successful, so he turned to street life, started selling drugs, and ended up in prison. That was when he realized he wanted to change his life, so he focused on music.

Dave’s music is somewhat different from what we are accustomed to, when it comes to the rap genre. He has a similar style to 90s rappers from New York, who used their music to address the problems in society. East is doing the same thing with his dark but catchy lyrics that are mostly about his troublesome childhood and street life.

Dave gained popularity in 2014 when he released his mixtape called Black Rose. After that, his favorite rapper Nas signed him to his label company called Mass Appeal Records. Turning his life around, Dave continued working on his career. He released over half a dozen mixtapes and a few singles, while gaining popularity on social media, as well. Currently he has almost 2 million followers on Instagram.

His mixtape Black Rose was praised by critics and audience in general. Since then he became sponsored by XXL Magazine entering their 2016 Freshman Class. He also released successful mixtapes like Kairi Chanel and Paranoia: A True Story.

As a result, he signed with Def Jam Records, and released Paranoia 2 that went on Billboards 200 chart.

East was born on June 3, 1988, in Harlem, New York City as David Lawrence Brewster, Jr. He spent most of his childhood between Queensbridge and East Harlem, so he choose to name himself after one of those locations.

He is of Dominican, Louisiana Creole, Bajan and Trinidadian decent. He always loved basketball and played it during his years at Sprinbrook High School, and then during college where NBA noticed him.

During his freshman year he was moving between Manhattan Center for Science and Mathematics and Long Island City High School, which made it difficult for him to play basketball professionally.

His father recognized Dave’s struggles and suggested him to move to Maryland to live with his half-sister where he could finally step on the court. That transition helped Dave get into a routine of a true sportsman.

His true talent developed in his 11th grade when serious programs like Georgetown and St. Johns contacted him. He would play with DC Assault, DC Blue Devils and NOVA United with people who would later become true NBA stars. Dave’s coaches always praised him, highlighting the fact that he could blend well with any team. Besides his good nature, his results were unbelievable since he scored 50 in one game.

He also played football, but basketball was his true passion. He played at Amateur Athletic Union alongside Ty Lawson, Kevin Durant and Greivis Vasquez. After finishing Springbrook, where he led his team to an 18-6 record in one season, Dave went to Atlantics 10s University of Richmond in Virginia.

However, he couldn’t focus on the game as much as he wanted and his grades became low. He got kicked from the university so he had to go back to New York where he tried to finish his school online.

Around that time he developed a love for rapping but he still had a dream of becoming an NBA star. To pursue that he went to Towson University in Baltimore but Dave still was not happy. His coaches didn’t treat him right there so he lost interest in ever playing basketball again. That unfortunate event caused him to change his behavior which led to him running around streets doing illegal things, for which he was imprisoned for six months.

During those six months Dave found Islam and he decided to change his life, so he started a rap career after getting out. On his first mixtape called Change of Plans he documented his whole life. He continued doing that in the rest of his projects, highlighting the fact that 29 years is a long time and a lot of material to try to record.

After slowly accepting that his basketball career was over, Dave decided to focus on music, so in 2010 he released his first mixtape called Change of Plans. The mixtape was not quite successful but his friend KD thought it was a great start. He invited Dave to his place where he had a music studio. Dave stayed with him for 10 days and recorded his second mixtape called American Greed.

Rapper decided to put his soul into the music he was trying to record, which definitely paid off since he caught attention of the rapper Nas. Before that happened, Dave released a few other mixtapes like Insomnia, Don’t Sleep and No Regrets. Since he was relatively unknown, he was selling drugs on the Harlem streets just to survive. Around that time he released his sixth mixtape called Gemini.

Nas’s younger brother Jungle, with whom Dave was good friends, introduced Dave to Nas. The rapper saw a potential in him, and decided to sign him to his label Mass Appeal Records.

Dave was a part of the label where artists like Bishop Nehur, Fashawn, Boldy James and Run The Jewels made their music. In July 2014, Dave released his seventh mixtape, first record under any label. The mixtape was called Black Rose. That was the first time he got some recognition for his work, since music critics reviewed it positively. He also released a mixtape called Straight Outta Harlem in 2014.

Next year he recorded another mixtape, this time working with big names like Pusha T, Nas, Jadakiss and Styles P. Dave titled it Hate Me Now. Since he got positive reviews again, East commented that Nas was the one to thank. He praised their friendship and Nas’s support.

In June 2016, Dave got featured in Freshman Class of 2016 by XXl Magazine, among other new artists, which was a great push for his career. After a few months, the rapper released an EP called Born Broke, Die Rich featuring another great artist, Kur.

Thanks to his success in the mainstream media, he was featured on the BET Hip Hop Awards in September 2016.

Under hip-hop executive Steve-O Carless he released his next mixtape, named after his daughter. The project was extremely successful, since it reached number 38 at American Billboard 200 chart. The tape included big rap stars like 2 Chainz and Fabolous as guests, reaching the Top Five of Billboards R&B/ hip-hop chart.

Dave decided to try acting, as well. He made appearance in the series “Being Mary Jane” by BET. A few months later he also appeared in Trina’s music video for the song “It Ain’t Me”. He also made a television appearance once again, in the Puma’s Tsugi Shinsej commercial.

At the end of the year, Dave decided to release another EP, this time called Paranoia: A True Story. The project was very successful, especially a single “Perfect”, on which Chris Brown was featured. The whole EP gained a lot of positive reviews entering Billboards 200 chart at a number nine. Some of the guests on the EP were Wiz Khalifa, Jeezy and Nas. The same year he released another mixtape called Karma.

After he hosted the first annual Goldie Awards, his next project was released on 16 January 2018. His new mixtape called Paranoia 2 was accepted well by the audience and the critics. Guests on the album were T.I, Lloyd Banks and Marsha Ambrosius. It entered US Billboard 200 chart, settling on 61st position.

During the summer of 2018 Dave released a sequel to Karma, called Karma 2. Later on, Dave went on a tour with Lauryn Hill. At the end of the year he collaborated with Lox’s Styles P in a song called “Beloved” which also went on Billboards 200 chart.

His biggest hit is probably “Wrote My Way Out”, with Nas, Aloe Blacc and Lin-Manuel Miranda.

East is very open about his religion and conversion to Islam, which happened while he was in prison. He pointed out that religion had brought him discipline which he lacked while he was trying to find his path in life. He is dating an American singer Kehlani since 2017 and has a daughter Kairi Chanel with another women.