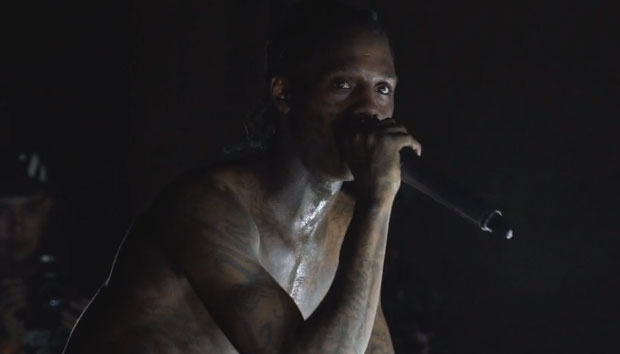 Famous Dex is an American rapper, singer and songwriter. His real name is Dexter Gore Jr. He was born on  September 6, 1993, in Harlem, New York. He became famous after dancing in his friends’ music videos in 2015. A year later he started making his own music, first doing remixes of other artists’ songs, and then producing some of his own.

He also goes by Black Migo Dex. His music is labeled as drill-trap rap. What makes him a bit different from most rappers is that he doesn’t talk about violence in his songs, but rather focus on creativity and inspiration in young people’s lives.

He is famous for his songs Drippy Drippy, Try Me and Bottle After Bottle. His notable mixtapes are OhhMannGoddDamm and Dexter the Robot. After those he signed for Rich Forever Music.

Famous Dex was born on September 6, 1993, in Harlem, New York. While he was an infant his family decided to move to Chicago where he spent his whole childhood. He was the fourth youngest of twelve children. He is of African-American, Jamaican, Moroccan, Indian and Canadian decent. His childhood was rough. Before turning one, his half-sister was shot while driving. His father, Dexter Gore Sr. who was in the US Army was arrested for gang related activities when Dex was only four.

Famous Dex grew up in the neighborhood of Englewood, Chicago. First he attended Catholic school in Hyde Park, then Hernandez Middle School and Paul Roberson High School. Prior to music, his first passion was basketball which he played up until his junior year of high school.

After high school, he decided to find a nine-to five job at Lids, but the streets dragged him in and he began dealing marijuana. He would also engage in other criminal activities, and was arrested on several occasions. He was also stabbed six times in his home. When he woke up from a four-day coma, he decided that he wanted a better life for himself. After eight months of rehabilitation he started making music. His big family was always supportive of that idea because all of them loved rap and music, in general.

His mother, Pamela Winters was a waitress and a chef in a restaurant. In 2015 she died from a breast cancer which really changed Dex’s views on life.

After he had decided to leave the streets and pursue music, he first started dancing in music videos of his friends. That brought him some recognition, so he decided to change his name to Famous Dex. When he first started doing music he was focused on making remixes of songs from other rappers. Songs that became famous were Kobe by Chief Keef and Try Me by Dej Loaf.

Dex then decided to release his own mixtape called Never Seen It Coming. The project was extremely successful, with songs such as Your Fault and For the Low. He released another mixtape in 2015 called Dexter’s Laboratory. That project skyrocketed him into mainstream media while his songs Swagg and Hoes Mad became viral on You Tube.

He gained a lot of attention for a song called Drip from My Walk which became popular on You Tube and Instagram. The same year he decided to release another album, this time called Dexter the Robot. Mainstream media and musical critics praised his rapping skills and more mature sound.

After that he released an EP titled Different.

Because of his huge success, Famous Dex was offered a record deal with Rich the Kid’s label Rich Forever Music. With it he released two mixtapes in 2017. Both of them, The Rich Forever Way and Rich Forever 3, were very successful, producing hits like You Flexing featuring Jay Critch.

Since then he has collaborated with big music names like Rich the Kid, Lil Tracy and ASAP Rocky.  At the end of 2017 he released Pick it Up, an official single from his debut album called Dex meets Dexter. The single made a lot of success, entering Billboard’s Hot 100 chart.

After that, Dex released his second single called Japan, on 16 March 2018. Famous collaborated with Drax Project, Lil Baby and Jay Critch on several more singles, that were all included in an album that was released the same year.

Besides music, he earns his money by owning a company and by selling clothes in his online store. His net worth is estimated to be around 2 million dollars.

Famous Dex is in a relationship with a girl known as Baby Mama. Even though they are not married, a couple has two daughters and a boy. Famous Dex was surrounded by controversy after a video of him brutally beating his girlfriend became public.
She sued him and he went to prison for a couple of months. After he came out he apologized publicly.
Soon after, the couple got back together. The video affected his business as well. He was supposed to perform at Irvine’s Shocktoberfest music event at University of California. Organizers of the event were criticized for having Dex perform, trying to ban him from the show.
It the end, Dex did perform, knocking down safety barriers which caused the venue to shut down.

He also lost a brand deal with XXL Freshman Class because of the video.

He is famous for drug abuse, impulsive behavior and face tattoos. One of his most famous tattoos is a pink ribbon on his cheek dedicated to his mom and all cancer patients. He is a fan of the cartoon Dexter’s Laboratory. He took inspiration for his stage name and album title from that show, which caused him some legal issues.

Besides tattoos, he is famous for his height, as one of the tallest rappers in the industry. He has braids which he dyes in red, blond or dark blue.