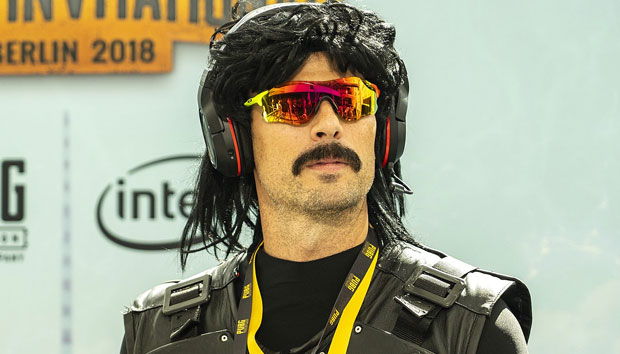 Herschel Guy Beahm IV is an American gamer, Twitch.tv streamer and Internet personality. He was born on March 10, 1982. In the virtual space he is better known as Dr DisRespect. He is famous for playing games like H1Z1: King of The Kill, Fortnite, PubG and Call of Duty: Black Ops 4.

He had started his career on You Tube, as Dr DisRespect, and soon after Sledgehammer Games hired him for the position of a Community Manager.
On March 1, 2012 he was promoted into a Lever Designer. He helped create multiplayer games for Call of Duty “Advance Warfare”.

He attracts a lot of attention because of his unusual looks, as well. When playing games he wears a long black wig, tactical vest, black sunglasses and mustache. He is 6, 8 feet tall. His signature phrases are “Violence. Speed. Momentum” and “I am on top of the mountain, and I’m only halfway up!”

After working for Sledgehammer Games for more than 3 years, he announced via Twitter that he was going to resign  and focus on his Twitch and You Tube channel again. He has 2.9 million followers on Twitch.

Any information about Beahm’s childhood, parents and early life is unavailable except for his education. He went to Polytechnic University Pomona in California, U.S. While he was in college, he played Division II NCAA basketball.

When he first started playing video games he called himself “Diarrhea Panic”. He decided to change his name to DisRespect and later to Dr DisRespect.

As he was good at entertaining people through the voice chat, he created a character that looked like a wrestler with black mustache and sunglasses.

After adding some finishing touches to the character, he and his friends began posting videos on You Tube on January, 2010. He played Call of Duty on his channel, mostly. Just a year later, Beahm stopped posting videos on  You Tube and never went back to it.

Around that time, Sledgehammer Games offered him a job of a Community Manager at their company. He decided to take it and was later promoted into a Level Designer, where he created different maps for Call of Duty.

While he was working for Sledgehammer Games, he joined Twich.tv, then called Justin.tv. Streaming was something he enjoyed a lot, so he decided to resign, explaining that he wanted to focus on his other interests.

After he had stopped working for Sledgehammer, he didn’t have a job and decided to move his family to Washington where he would work on World of Tanks. Around that time, Beahm was approached by Boom.TV investors who offered him to be their consultant.

That worked out well for him – he was getting 25 to 30 thousand views per stream. He works from Monday to Friday for 6 to 8 hours. He has an online feud with another streamer, Jaryd “Summit1g” Lazar, but in real life they are good friends. Guy says that Lazar is an inspiration for him, while their rivalry is great for their work.

In 2017 he decided to take a break from streaming to save his marriage. The same year he got an ESports Industry Award for “The Streamer of the Year” and The Game Award for “Trending Gamer”. He returned on 5 February, 2018, gaining more than 380 thousand viewers.

Guy Beahm is very private when it comes to his personal life. Thanks to his Twitter and Twitch posts his fans are able to know a few things about him.

On 30 October, 2014 he became a father, when his daughter Alana was born. In December the same year, Guy posted a video on his Twitch account where he explained that he was going to take a break from streaming because he needed to work on his marriage, which was suffering due to his infidelity.

Two months later, he returned to streaming, together with his wife, who created a character called Mrs Assassin. Guy explained in an interview that his family still suffered consequences of his misbehavior.

Guy Beahm is 6 feet 8 inches tall. It is estimated that he earns around ten thousand dollars per month.