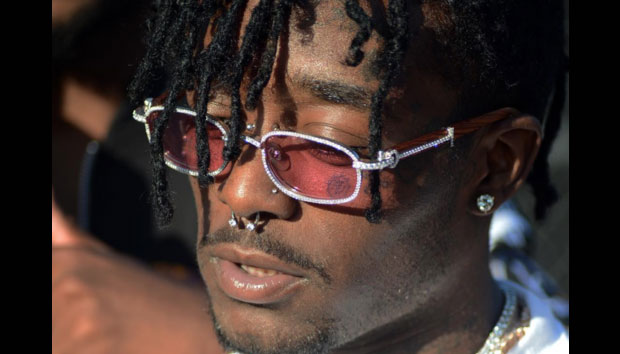 Photo: Frank Morales / CC BY SA 4.0
Symere Woods is an American rapper and songwriter. He was born on July 31, 1994 in Philadelphia, Pennsylvania. He became famous as Lil Uzi Vert.

Lil Uzi’s career started when he released a mixtape called Luv Is Rage which helped him get a record deal with Atlantic Records. The first single from the mixtape “Money Longer” got into the Billboard’s Hot 100 chart, which was the first time his work was recognized.

His second mixtape Lil Uzi Vert vs. the World was even more successful reaching number 37 on Billbord 200. After that, he collaborated with big rap names. His collaboration with the band Migos in a song “Bad and Boujee” skyrocketed him to number one on Billboard’s chats.

The first single from his debut studio album, “XO Tour Llf3” went to number 7 on the Top 10 chart, while his album became number one on Billboard 200. It was later certified platinum.

Lil Uzi was born on July 31, 1994 in North Philadelphia, United States. Information about his family is not public. His interest in music and rapping started to develop when heard his friend free style over Chris Brown’s instrumental.

He was in 10th grade when he formed a band with his friend William Aston and another classmate, called Steaktown. The band, however, didn’t last very long.

He went to Sayre High School, but he was transferred many times, attending Camelot, Northeast and Olney High School. He didn’t take his rap career seriously, so when he dropped out of high school, he found a regular job. Such lifestyle was quite unusual for him, so he decided to quit after four days. His mom was mad about it and kicked him out of the house.

Soon after that, he decided to become a rap star. His face tattoo is dedicated to that period of his life, remanding him to have faith in his success.

Rapping is not Lil Uzi’s first love, which can be seen if we take a look at his musical influences over the years. When he was in his teenage years he would listen to Marilyn Manson, Paramore and My Chemical Romance. Later on, he started to enjoy Wiz Khalifa’s and Meek Mill’s music.

His music reflects his personal style as well. Even though he is a rapper, many critics compare his music to rock because of its melody and vocal style. On a few occasions Uzi stated that he didn’t rap because he liked it, but because it was bringing him money.

Vert released a single called “White Shit” prior to releasing his debut EP Purple Thoughtz Vol. 1 on January 19, 2014. In this EP he focused on the lyrics more than ever before, which caught attention of ASAP Mob.

After DJ Diamond Kuts played his song on the radio, producer Don Cannon decided to produce his first mixtape The Real Uzi which was released on August 5, 2014. After that he signed a deal with Atlantic Records.

Since then, he collaborated with big rap names like Lil Durk, Rich the Kid, ASAP Ferg and Dej Loaf. 2015 was a good year for Uzi. He released a few songs on SoundCloud with big names and went on Boys of Zummer tour with Wiz Khalifa.

In the fall the same year, Uzi released his second mixtape called Luv Is Rage. Rappers like Wiz Khalifa and Young Thug were featured in it. That earned him a title of a breakout artist of 2015 by HotNewHipHop.

In 2016, Vert released his new single called” Money Longer”. That was his first song that became extremely successful. In April the same year, he released his third mixtape called Lil Uzi Vert vs. the World which went on 37th position on Billboard 200 chart.

That was his first mixtape to make such success, staying on the chart for 55 weeks and becoming Golden after some time. Two months later, Uzi and Kodak Black went on a joint tour Parental Advisory.

His two singles, “Seven Million” and “Erase Your Social”, which were supposed to announce a new mixtape didn’t do very well on the charts. Even though the singles didn’t succeed, Lil Uzi had published his 4th mixtape on his 22nd birthday.

The mixtape, called The Perfect Luv Tape, entered the Billboard 200 album chart and was later labeled Golden. On November 23, the same year, he released a mixtape featuring Gucci Mane and just a few days after that, he announced his fifth mixtape Luv Is Rage 2, which was delayed several times before its release.

On February 27 2017, he released his new EP Luv is Rage 1.5 which was again positively received. The EP was presented as a new side of the rapper because for the first time people could learn about a darker side of him, talking about depression and suicide.

His single from the EP, “XO Tour Llif3” became his highest ranked song, enabling him to go on a tour with Weeknd and it was certified platinum six times. His second single featuring Playboi Carti, “Woke Up Like This” was also labeled platinum after two artists performed it at Coachella that year.

On August 25, 2017 Lil Uzi’s first studio album Luv Is Rage 2 was released. The album went to number one on the Billboard 200 chart, being certified platinum. Singles like “The Way Life Goes” and “Sauce It Up” were in the Billboard’s Hot 100 chart.

Even though Uzi had announced a collaboration with Playboi Carti and a sequel of his tape Lil Uzi Vert vs. the World, none of it happened. Instead, Uzi was featured on Nav’s single “Wanted You” that was labeled platinum.

At the end of the same year he collaborated on different projects with Nicki Minaj, The Weeknd, Migos and Cardi B.

In 2018 Lil Uzi collaborated with Kanye West and Travis Scott on a song called “Watch”. Besides that, he was featured on Playboi’s song “Shoota” and a remix of Lil Tracy’s song called Like a Farmer. All of those projects received positive reviews, entering Billboard Hot 100 chart.

Lil Uzi Vert was dating a fashion designer Brittany Byrd from 2014 to 2017. She was his personal stylist. There were rumors that she cheated on him, which could be the reason why the couple broke up after three years of dating. He dedicated many songs to her. She even appeared in a music video for his single “Money Longer”. After the breakup he wrote a song “Stole Your Luv” which was about their relationship.
Lil Uzi stirred some drama on Instagram when he posted a picture of the two with captions More Than Friends, alluding to them getting back together.

He was friends with late rappers Lil Peep and XXXTentacion. Because of their death he decided to stop taking drugs and funded a campaign to stop gun violence.

Uzi is one of few rappers that publicly said they were bisexual. He is also open about his love for Satan, promoting it on his social media and his shows. Uzi has a lot of enemies as well. He is feuding with Don Cannon, DJ Drama, OG Maco, Reese LaFlare and Rich the Kid. All of his feuds had started on social media while most of them almost resulted in physical fights.

His net worth is estimated at around 5 million dollars.