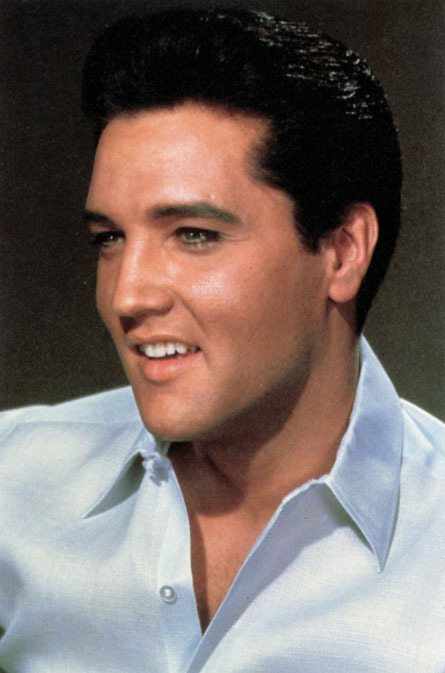 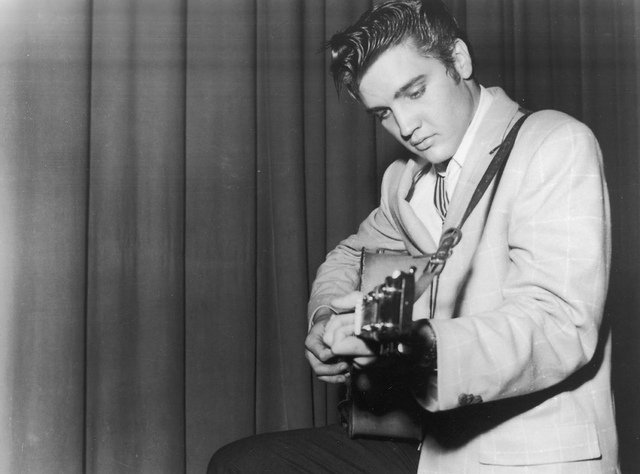 Elvis, Elvis Presley, The King of Rock ‘n’ Roll and The King are all the names used to refer to a cultural icon that paved the way to an era of American music and popular culture. Elvis was an American singer and actor, idolized for his charm, looks, charisma and undisputed talent. His milestones include the highly publicized visit with President Richard Nixon at the White House, staging the first global live concert via satellite (Aloha from Hawaii), which is considered the most watched broadcast by an individual entertainer in television history, numerous Grammy nominations (three Grammy awards), Country Music and Gospel Music Hall of Fame Inductee and being named one of the Ten Outstanding Young Men of the Nation for 1970 by the United States Jaycees.

Elvis Aaron Presley was born on January 8, 1935 in Tupelo, Mississippi to parents Gladys Presley (nee Smith) and Vernon Presley. Elvis’ twin brother Jessie Garon Presley was born dead. His family consisted of his parents, grandparents, aunts, uncles and cousins that all lived within Tupelo and were close-knit. Elvis grew up listening to the sounds of black bluesmen in the neighborhood, and country music radio programs, in addition to the usual Sunday church service that resonated within him.

At age ten he entered a youth talent competition at the Mississippi-Alabama Fair and Dairy show and won the fifth prize for his singing effort. One year later he was given a guitar for his eleventh birthday. Between 1948 and 1953 Elvis’ life had significant changes: he and his parents moved from Tupelo to Memphis, Tennessee settling in a public housing scheme in search of a better life economically. He attended L.C. Humes High School where he won a student talent show and worked odd jobs to help support the family.

Elvis graduated from L.C. Humes in 1953 and found work at Parker Machinists Shop before moving on to Precision Tool Company and later Crown Electric Company in 1954. Elvis also tried his hand at music by creating demo acetate of “My Happiness” and “That’s When Your Heartaches Begin” at Sun Label Records which impresses the owner Sam Phillips. Phillips arranged for Elvis to team up with local musicians Scotty Moor and Bill Black to release the single “That’s All Right” in July 1954. The trio went on to play at small clubs and made other appearances that would soon bring them moderate success.

In October 1954 they appeared on the Louisiana Hayride, a live Saturday night country music radio show in Louisiana that had coverage of 190 stations in thirteen states; the band subsequently signed a contract for fifty-two future appearances. By 1955 Elvis’ popularity had grown to a national level, and he’s especially admired by the female fans. There are also reports of near-riot behavior.

In 1955 Elvis signed to RCA Records with a contract that allowed him to bring over his Sun Label material including five singles that were previously released; RCA re-released the singles on its label. Elvis also managed to seal a deal with Hill and Range Publishing Company which would seek songs for Elvis to record. He released his first RCA song in 1956 titled “Heartbreak Hotel/I Was the One” which sold over 300,000 copies in less than a month. The single topped Billboard’s pop singles chart for eight weeks and placed number one on the country music chart, it also earned Elvis his first gold record award.
In March of 1956 Elvis’ first album “Elvis Presley” went to number one on the pop album charts topping over one million in sales. It became his first gold album. For the rest of the year Elvis continued his tours and made several appearances including on television shows such as The Milton Berle Show on NBC, The Steve Allen Show on NBC, and the Ed Sullivan Show, the top television program of the era. Elvis sent up the ratings for all three shows and made history with the ratings he attracted for Sullivan.

Elvis in the Movies

In August 1956 Elvis shot his first movie, Twentieth Century Fox’s Love Me Tender and by the following month Elvis Presley Day is proclaimed in Tupelo, Mississippi. Elvis-inspired merchandise and paraphernalia begin to take over the market raking in big revenues for The King. Love Me Tender was released in November and became a bit hit and by December The Wall Street Journal reported that Elvis’ merchandise business had grossed $22 million in sales. Elvis quickly became a cultural icon and was surrounded by societal controversies some bordering on racism on censorship.

By 1957 he was able to purchase the infamous Graceland Mansion into which he moved his parents and grandmother. Elvis’ second motion picture, Loving You, premiered in Memphis on July 9th and peaked at #7 on the National Box Office Survey. His third movie opened in October 1957 peaking at #3. The title song also adds to Elvis’ list of big hits. November saw Elvis performing in Hawaii for the first time and by December he received his draft notice for the U.S. army.

Elivis kicked off 1958 with his fourth movie King Creole which became a top five film at the box office. By 1960 Elvis began working on is post-army album, Elvis is Back! and his fifth movie G.I. Blues (the album topped the Billboard album charts and became his most successful album ever); he also made an appearance on Frank Sinatra’s Welcome Home variety show. Elvis ended the year with two additional films, Flaming Star and Wild in the Country. Between October 1961 and March 1963 Elvis filmed several motion pictures including Blue Hawaii, Kid Galahad, It Happened at the World’s Fair, Fun in Acapulco, Kissin Cousins and Follow that Dream.

Elvis continued to ride waves in the film industry; he filmed several movies including Tickle Me (1964), Harum Scarum (1965), Spinout (1966), Stay Away, Joe (1967). During this time he created new music albums and that ensured he stayed on top of his musical career.

Named as a cousin of President Jimmy Carter, Elvis Presley also had Cherokee lineage. He married Priscilla Ann Presley on May 25, 1967. The couple had their only child Lisa Marie Presley on February 1, 1968. He’s also reported to have been in relationship with actress Linda Thompson for four years.