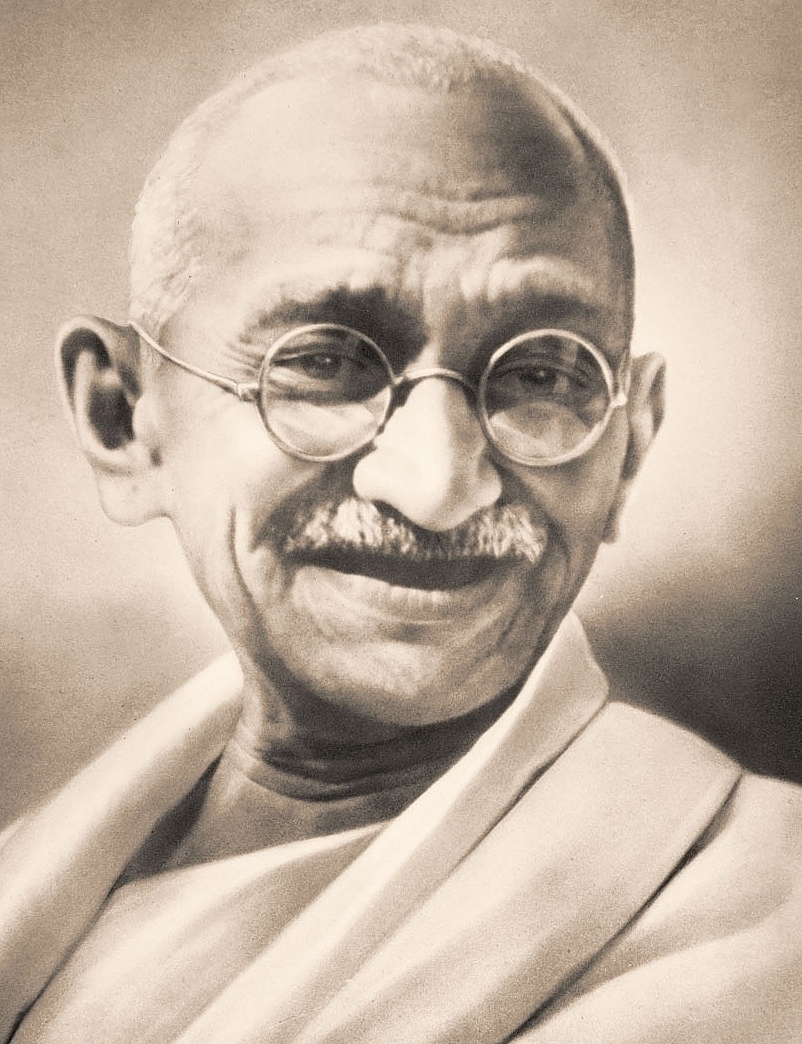 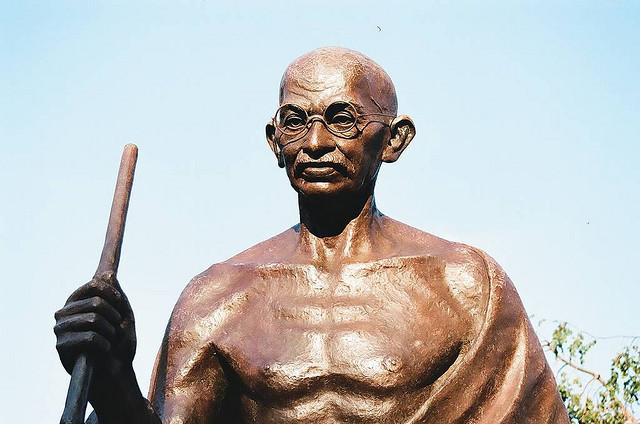 Mahatma Gandhi was a great spiritual and political leader during the Indian independence movement against the British Empire and other colonial administrations in South Asia. He developed the Satyagraha a philosophy that embraced the practice of nonviolent resistance; it was this philosophy that guided the Indian nation to independence with Gandhi at the helm.

Gandhi is honored as the Father of the Nation and his birthday is recognized as a national holiday in India and also as the International Day of Non-Violence worldwide. His campaigns included the fight against poverty, injustice and violence. He also advocated for women’s rights and harmony between religious and ethnic entities. 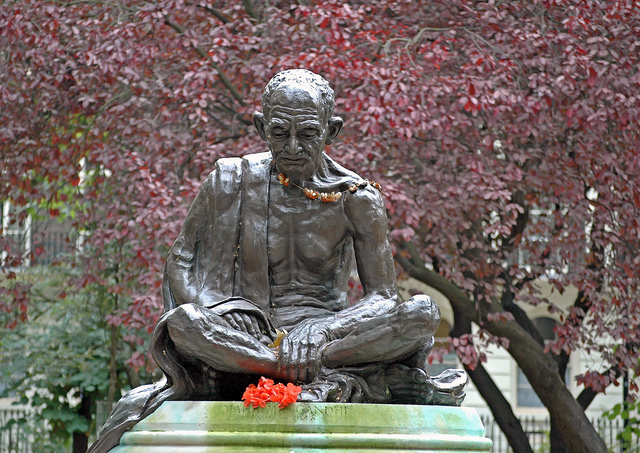 Mohandas Karamchand Gandhi was born in Porbandar, India, on 2 October 1869. His father, Karamchand Gandhi (1822-1885), was the Prime Minister of the Porbander state located in the Kathiawar Agency of British India, and his mother, Putlibai, was his father’s fourth wife (his preceding wives died in childbirth).

Gandhi grew up with under the influences of Jainism, an ancient dharmic religion from India that prescribes a path of non-violence for all forms of living beings in this world. It teachings included compassion for sentient beings, vegetarianism, fasting for self-purification, and mutual tolerance between different beliefs and principles.

Gandhi loved to read and stories such as the great Hindu epic Ramayana played a role in his upbringing as he identified with the heroic characters. Following the custom of his country Gandhi was married at age thirteen to Kasturbai Makhanji. Two years later they produced a child that died shortly after birth. The couple went on to produce four sons between 1897 and 1900.

Gandhi attended Samaldas College at Bhavnagar, Gujarat and in 1888 went to University College London (UCL) where he studied law and began training to become a barrister as desired by his family. Holding on to his customs Gandhi sought a reliable source of vegetarian cuisine and ended up as a committee member of the Vegetarian Society. His interaction with other members led to his discovery of a Theosophical Society that studied Buddhism and Hinduism, and, his subsequent involvement in their studies.

Gandhi was called to the bar on June 10, 1891 and left London for India on June 12. On his return to his country he found out that his mother had died while he was away. He made a few attempts at establishing his career in law and in teaching before he received a work contract from and Indian firm called Dada Abdulla & Co in South Africa.

In South Africa, Gandhi faced racial discrimination in various ways that made living in the country very difficult. The prejudice faced was a reality check that opened his eyes to the injustice being suffered by his people at the hands of the British Empire, the inability to vote, own homes, go out at night without a permit, or walk along a public path were just some of the discrimination faced. He began to find ways to ensure that the equal rights of Indians were acknowledged, starting with a bill that refuted their right to vote. Gandhi’s campaign to stop the passing of the bill was not successful but it however brought attention and publicity to the violation of Indians in South Africa.

In 1897 Gandhi’s wife and children joined him in South Africa. He became one of the founders of the Natal Indian Congress, an organization established to fight discrimination against Indians in South Africa. In 1906, the Transvaal government introduced a new Act compelling registration of the colony’s Indian population. In September 1906 Gandhi led a meeting with the masses inveigling them to adopt the principles of the Satyagraha in their protest against the Act. Many were physically abused and violated in this non-violent fight but they endured for seven years and Gandhi was able to negotiate a compromise with the South African General.

Gandhi remained in South Africa for twenty years. During the Boer War, Gandhi organized an ambulance corps for the British army and commanded a Red Cross unit. After the war he returned to his campaign for Indian rights. In 1910, he founded Tolstoy Farm, near Durban, a cooperative colony for Indians. In 1914 the government of the Union of South Africa made important concessions to Gandhi’s demands, including recognition of Indian marriages and abolition of the poll tax for them. His work in South Africa complete, he returned to India. 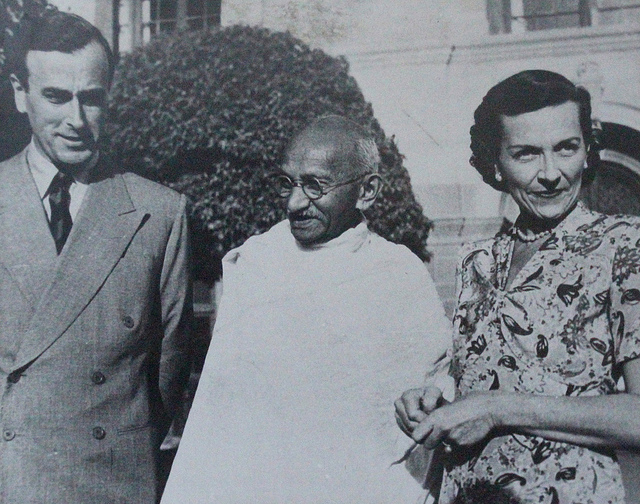 Return to India and Death

Gandhi returned to his homeland and began his campaign to setting India free of British rule.

He became one of the leaders of the Indian National Congress, and in 1918, he opposed the increasing tax levied by the British during the devastating famine. He was arrested and released, continuing his negotiations on behalf of Indians. He was imprisoned from 1922-1924, being released after an appendectomy. Gandhi went on to lead several further campaigns against the British Government some of which caused his imprisonment along the way, his last release being in May of 1944 after a two year arrest (his wife died during his captivity).

India won its independence in 1947, followed by the Indo-Pakistani War of 1947, and partition of India. Approximately one million people died until partition was reluctantly asserted by Gandhi as the only way to stop the Civil War. He urged the Congress Party to accept partition, calling for a stop to all violence.

On January 30, 1948, Gandhi was shot three times in the chest and died while on his way to a prayer meeting. His assassins were convicted and executed a year later. The ashes of Mahatma Gandhi were split in portions and sent to all states of India to be scattered in rivers.