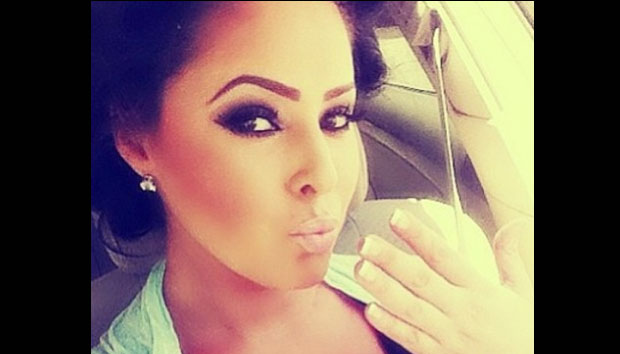 Fatmire Myla Sinanaj is an American model, singer and adult movie actress. She was born on January 1, 1987 in Ellenville, New York. After she had graduated from high school, she worked in a hotel in New York. Myla became famous by dating the basketball player Kris Humphries. She is also known for her resemblance to Kim Kardashian.

Myla Sinanaj was born on January 1 1987 in Ellenville, New York City, where she grew up. Ever since she was a little girl she craved attention, and when she was in high school she would talk about wanting to be a celebrity one day. When she finished high school, Myla started working in a hotel in New York called Gansevoort Park.

Even though Kris was a successful basketball player, he was better known for his controversial girlfriends and relationships than his skills. Today the world refers to him as an ex-husband of Kim Kardashian. Right from the start of Kris and Myla’s relationship many speculated that she only wanted attention and publicity but gossips didn’t harm the couple. Myla was interesting to the tabloids because the “Kim and Kris drama” was still fresh.

She loved the attention and didn’t even try to keep her relationship private. She got even more publicity when she stated that she deserved to be famous because she looked just like Kim. A few months into the relationship Myla even stated that she was pregnant. The press went crazy and after a while she confessed it was all made up. At that time Kris stayed out of the public eye because he believed that he was the father. After a few months of dating, Myla broke up with Kris as she felt their relationship was not healthy. Later on she wanted to sue Kris for “defamation” but she didn’t, due to financial problems.

The obsession with Kim Kardashian

When Myla started dating Kris Humphries she made a few comments about Kim Kardashian, comparing herself to her. She said that she deserved to be a big star because she thought she looked just like Kim. In 2012, right after she started dating Kris, Myla turned to plastic surgery so she could look even more like her. She had enhanced her breasts and even though she never admitted of getting surgery, it was strange to see her thighs and rear suddenly look bigger. She apparently wanted to look like Kim, but it was clear how much she hated her.

Tabloids have been writing about how much hate Myla had towards Kim, and Myla has never denied any of those claims. After all the things she said and the surgeries she had, it was clear that her relationship with Kris was just a publicity stunt and a step closer to looking like Kim. After her break up with Humphries, she came out with a sex tape called ‘’Anti Kim Kardashian XXX” in which she appeared with a Kris Humphries look alike. At the start of the video they even had Kim Kardashian’s tape playing in the background and then Myla saying she can do it better than Kim. She wanted to make millions off of the sex tape so she could start her own reality show. In June, 2013, via Twitter, Myla said that Kim Kardashian cheated on the NFL star Reggie Bush with Kanye West.

Myla Sinanaj has her official Facebook page with over 12 000 followers, a Snapchat account, and an Instagram profile were she posts pictures of herself daily. She is active on Twitter, where she’s constantly involved in arguments. Myla was on the cover of several magazines, including “Fashion”.

Myla is Albanian, but she was born in New York. She is 31, and is 170 cm tall. She has black hair and brown eyes. Her hobby is fashion designing. Her best friend was Farrah Abraham who also released a sex tape, but no one has seen them together recently. Her net worth is approximately 200 000 dollars.