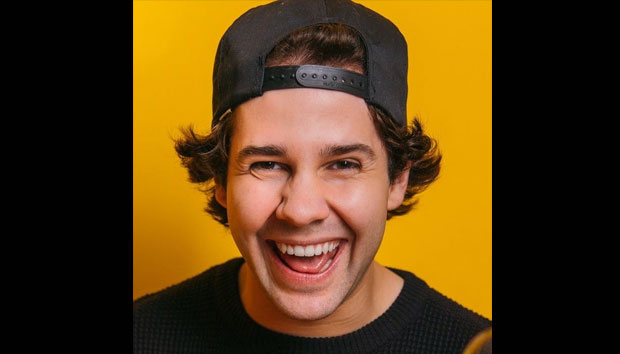 David Dobrik is a Slovakian-American Viner and YouTube star. He was born on July 23, in 1996 in Slovakia. His career started after posting videos on a platform called Vine, in 2013. Since then, he has managed to transfer his business to other social media, achieving great success and fame.

David was born in Kosice, Slovakia, but his parents decided to move to United States when he was only five. He doesn’t like to share a lot about his personal life on the Internet and because of that we don’t know much about his family. He has two younger sisters, Ester and Sara, and a younger brother Toby.

His sister Ester also has a YouTube channel, but David is not very supportive of her career choice, and he has refused to promote her channel on his social media.

The family moved to Illinois, Chicago when David was only five years old. He went to Vernon Hills High School, but didn’t finish it because he wanted to focus on his career. During his high school years he was engaged in sports, playing tennis for Vernon Hills and basketball recreationally.

For David everything started on April 3 2013 when he posted his first video clip on Vine. The app was known for six second comedy videos which included pranks, sketches and sing offs. David was very successful on Vine, reaching over 1.4 million subscribers. He managed to boost his fame doing collaborations with other successful Viners like The Gabbie Show and Alex Ernest.

Having reached a decent amount of followers, David decided to start making You Tube videos. Collaboration channels were very popular at the time, so he joined a channel called Second Class, which was run by five other people. Second Class was not a success, featuring David in only six videos that were mostly pranks. Despite its failure, the channel hasn’t been deleted.

Growing in popularity thanks to Vine and a collaboration channel, David created his own channel at the end of 2014, called David Dobrik. Two months later, he posted his first video. He managed to gain a little more than 40 thousand followers which would be good enough for some people, but not for David.

He then decided to create a Vlog Squad that would help him make more success. David’s work ethics and creative editing style had soon paid off and he gained over a million subscribers in a year.

Audience was interested in a new concept of video editing, famous for many jump cuts and sketches, resembling to some extent a short collection of vines.

In the beginning The Squad consisted of Corinna, a beautiful girl known for her promiscuous behavior, Scotty, a depressed guy that always gets ignored by his friends, Heath, a guy with a bad-boy image, Zane, Heath’s lover, Alex, an obsessive-compulsive man with anger issues, Toddy, a sexy dumb guy and BigNik, disabled wannabe rapper.

His comedy videos are always 4 minutes and 20 seconds long. He posts three times a week, on Mondays, Wednesdays and Fridays.

He has expanded his squad bringing in people like Jason Nash who plays two characters in his videos,  Josh Peck and a You Tube star Trisha Paytas, Jason’s girlfriend.

David’s “boy next door” image and a career without controversies have enabled him to gain over 9 million subscribers on You Tube, 2 million on Twitter and over 6 million on Instagram.

On October 15 2017 he decided to create his second channel called David Dobrik Too. On it he would post videos that are unrelated to his comedy skits. David Dobrik Too consists of bloopers, challenge videos with his girlfriend Liza or Q&As. In less than a year he managed to attract 4.6 million people to that channel.

His business doesn’t revolve around social media only. David has a merch store where he sells clothes. Some of his most famous merch items are Clickbait and TooMuchScotty. Besides that, David has a podcast called Views that he works on with his friend and co-worker Jason Nash.

Dobrik had a role in a short film called “An Interrogation” in 2015. The same year he participated in the television shows The Honest Show and Prank U. In 2016 he had a role in a film that his friend Jason Nash directed, called “FML”. After that he became a part of the television show Airplane Mode where he worked with actress Chloe Bridges and fellow You Tuber Logan Paul.

Thanks to his great success in the media, it is estimated that David earns from 2 to 4 million dollars a year. That number could be even higher because of brand deals with companies like Seat Geek and Honey whose products David promotes on his channels.

Coachella was great but Koshella was wild

David has been very open about his love life. Even though there were some speculations about him being gay, David started dating Liza Koshy in 2015. She is a Vine and You Tube star as well.

That relationship has helped both of them when it comes to success on You Tube because their audience loves them as a couple. There are many channels devoted to sharing the couple’s pictures and fan fiction on the internet.

On June 4th 2018 David posted a video called We Broke Up on his channel. In it Liza and David explain their break up. They also said that there was hope that they would get back together and that they would always be friends.

Their fans were devastated but that did not affect their followers count. On the contrary, the brake up video has over 45 million views today.

There are some controversies over David’s relationship with his best friend Gabbie Hannah. Even though she is a part of the Vlog Squad, since Liza and David’s break up, she has not been in the vlogs. Fans and drama channels are speculating that Gabbie has had something to do with their split, even though all three of them have denied those rumors.

David is also famous for surprising his fans and friends with gifts and surprise appearances at their houses. He volunteered to make a video for the Superheroes For Kids Campaign to help raise money for Children’s Miracle Network Hospital, in order to help finance the life-saving treatments, equipment, research and charity for sick children across North America.

In 2017 he won a Shorty Award for Vlogger of the year, and Streamy Award for Best Ensemble Cast and Best Vlogger in 2018.

In 2017 David announced that he could be deported to Slovakia because his DACA act was terminated by President Donald Trump’s administration. His fans, friends and his ex-girlfriend all started a petition on Twitter and other social media to support him.

David moved to Los Angeles, California after his channel started to grow.